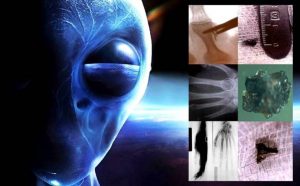 Do people really have contact with ETs? Are there real implants put in people by aliens? Can alien implants be removed?

A claim among so-called alien abductees is that some type of object has been inserted into their bodies. Extraterrestrial implants are often said to be placed in the nasal cavity, although self-proclaimed alien abductees have reported implants in other locations, including the ear, shoulder blade, and even in the foot.

If alien abduction is real and abductees receive implants, what are they made of and what purpose do the implants serve?

According to researchers in the field, alien implants are generally said to be small metallic objects . Many appear to be surrounded by an electromagnetic field.

These objects sometimes show up in dental x-rays, completely catching a person off guard. In many cases, people who have implants have no knowledge of what the object is, nor do they have any memory of the implant process or abduction event.

What are Alien Implants Made of?

Dr. John Mack, who was one of the most revered and respected UFO researchers in the field, had an implant analyzed and found it to be, “An interestingly twisted fiber consisting of carbon, silicon, oxygen, no nitrogen, and traces of other elements.”

Other researchers have had so-called alien implants analyzed and thus far, although there have been some interesting finds, there is no evidence to prove they are other worldly.

It’s interesting to note that not all implants are the same which raises the following question. If abductions really exist, could there be more than one race of aliens abducting humans?

What are Alien Implants for?

The purpose of alien implantation is a much-discussed issue among researchers and different theories exist. One of the most popular theories is that the implants are a type of tracking device so if the ETs wish to abduct someone again, they’ll know how to find the person.

However, one woman who had her implant removed by Dr. Roger Leir, a California podiatrist well-known in UFO circles for his research and implant removals, reported the abductions continuing, even after the implant was removed.

Another theory is that they are used for monitoring purposes just like scientists place implants in animals to conduct monitoring. An even more sinister hypothesis is that they are there to be used as a human mind controlling device.

As to date, Dr. Roger Leir has successfully removed sixteen implants from patients who believe they have been abducted by aliens. Each implant has been carefully studied by such prestigious labs as Los Alamos National Labs.

Leir has a strict criteria for accepting candidates for this surgery, as he charges no fees for this service. Other doctors have removed implants as well, but, Leir’s implant removals and research are best known.

Although there is no solid proof that alien implants or even alien abductions truly exist, there is enough mounting evidence to at least take the matter under consideration.