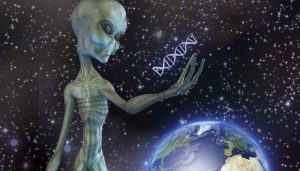 Are there other inhabited planets in the universe? This question has crossed the minds of some of the greatest thinkers of history.

In fact, many philosophers theorized that the universe was infinite and that Earth was just one amongst many other planets. The obvious consequence of this theory is the assumption that there should be life somewhere else in the space. Why would humans be the only ones to inhabit such a vast universe?

Unlike many people suggest, it is not true that the ancient world believed that the Earth was the centre of the universe – many thinkers said exactly the opposite.

Only after Christianity, the Aristotelian idea that everything revolved around Earth became widespread, creating an obstacle to the theory of life on other planets, but long before Jesus even existed, other philosophical systems advocated alien life.

Now let’s see what eastern philosophy, some Greek philosophers and other great thinkers had to say about alien life.

The Vedic literature teaches that the Hindu cosmology is sun centered and includes many other inhabited planets in its system. However, all planets have a specific role in the universe and they are all part of a bigger plan, subjected to the same universal rules.

Planets are considered living beings in evolution and therefore, they are in different stages of the evolutionary journey. The planets are divided in groups of seven (called planetary chains) and they shelter different kinds of life – from mineral, vegetable, animal and human life to high-tech societies with subtle bodies and vast knowledge.

All these inhabited planets are part of a scheme which emerged to develop the consciousness from unconscious to conscious, from automaton to intelligent and from ignorant to virtuous.

The consciousness then, travels through different planets acquiring different faculties at each new experience until its journey is complete – the vital principle which once was unconscious and automaton becomes completely conscious at the end of the trip, passing through the condition of being mineral, vegetable, animal, human and finally, perfect and therefore, closer to the divine.

The many planetary chains that exist in the universe obey to this pattern and all our alien brothers are taking this same road towards perfection, according to the Hindu knowledge.

Anaxagoras, Democritus, Leucipo, Epicurus, Plutarch and Metrodorus of Chios, among other great Greek thinkers, advocated that there should be life on other planets.

Democritus (460-360 BC) argued that not only the universe is infinite, but there are also multiple worlds (like an ancient version of the multidimensional universe theory) and possibly, identical worlds exist.

He also stated that while some worlds are being born, others are dying or being destroyed as they are in different moments of their evolutionary journey. The inhabitants of such planets would also be in different stages of evolution.

Epicurus (341 – 270 BC), who was a follower and an admirer of Democritus, not only agreed that the many inhabited worlds were part of an evolution process, but also asserted that like plants and animals, planets are living being. This whole concept is incredibly close – if not identical – to the eastern view of the universe.

Now let’s say that there’s a field of fertile soil and grains of corn are spread through this field. The idea that only one of these many grains will evolve into a corn plant is as absurd as believing that in an entire universe, only one planet will develop life. This was the argument of Metrodorus of Chios, another follower of Democritus.

Giordano Bruno and Life on Other Planets

Later, in the middle ages, influenced by Hermeticism and Pythagorean teachings, Giordano Bruno defended heliocentrism and also argued that the solar system was one amongst many other solar systems.

Like the great thinkers who came before him, he believed that life was the rule in the universe and not the exception, therefore all the planets in other solar systems would be inhabited.

These inhabited planets, according to Giordano Bruno, would be subjected to a greater law that united them towards the same objective: evolution of the matter.

As a true pantheist, Bruno theorized that the existence of many worlds was inherent to the infinitude of the Cosmos and all universe was really just one entity, one being that would accommodate all worlds in its body just like a person has many different organs and still is one person.

Giordano Bruno ended up dead, burnt at the stake by the Church in 1600.

The Truth About Aliens Lost In The Library Of Alexandria Fire