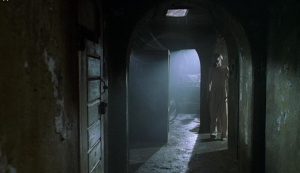 I tell this account of a series of experiences my wife and me had with a not-so-nice spirit. We had never planned to tell this experience outside of our circle of close friends, but I guess it is worth sharing.

I rented an upstairs apartment of a farmhouse on a mountain-top that was located at the intersection of RT 33 and “I believe” County Rte 12 in Penderton County, WV. (Midway between Brandywine and Franklin WV).

1. This didn’t register when I first moved in, but the landlady said the apartment became available when a school teacher suddenly left one night, and went back home to (Kansas, Illinois, or Iowa). She left furniture, clothes and all, and wanted none of it returned to her). The landlady passed it off as an irresponsible person who didn’t value a job or money). Sounded good to me at the time. I was just looking for a place to live.

2. I lived in the house for a couple weeks by myself before my wife and daughter joined me. Only one thing happened in that two weeks. I was laying on the floor late one night listening to music when I heard a crashing sound in the bedroom. I got up to investigate, saw nothing, then retired to the bed for the night because it a little after 1 AM. I thought nothing of it.

3. After my wife and daughter arrived, a couple weeks went by with nothing out of the ordinary happening. Then for 3 or 4 nights straight at about 1:30AM we heard the phone ring several times in the landlord and landlady’s downstairs apartment. We heard someone walk across the floor, apparently answer the phone, then start talking in a muffled tone. Late-night news usually means bad news, so we hoped all was well with them.

After about the fourth straight night of hearing the phone, we approached the landlady, and asked if everything was ok. We told her we heard the phone ringing, and hoped it wasn’t bad news. She looked at us like we were crazy, and then said that they had not received any phone calls. My wife and I eventually blew it off as the landlady being unwilling to share their personal business with strangers.

4. Maybe a week later while I was at work, my wife was writing a letter to her Grandma, and words suddenly appeared on her paper in thick black ink that said: “DON’T HURT THEM”. The words then disappeared.

Just before the words appeared, the room became very hot, then cooled back off after the words went away. My wife threw the letter away and wrote a new one. She didn’t tell me of that experience right away, as she thought her imagination was getting away from her. (Background: Earlier that evening my wife and I had been walking on the farm, and noticed how run-down things were getting. The owners were in their mid-late 80’s, and were unable to keep the farm up. We said during dinner that they should consider selling the farm to younger people who can take better care of it).

5. A couple nights later I worked a night shift. Between 1 and 2 AM my wife called and asked me to come home. There was a major problem. After questioning her, she said she was asleep in the bed, when the bedroom window opened, and a mist appeared in the corner by the window.

The mist moved over to the area of the room where my daughter was sleeping in a crib, then made its way to the side of the bed. Then it moved across the room, and went out the window. Then the window slammed shut. The whole time the mist was in the room, my wife said she could hardly breathe, as the room was hot and smelled rotten and sulpher-like. When I arrived home she looked awful. You could tell she had been through a terrible trauma.

She explained all that happened. I tried the window to see if it could go up and down easily to try and explain away what happened, but could barely budge the window a couple inches. It was at that time that she shared the letter writing incident with me.

6. After that, we both constantly felt as though there was someone hanging over our shoulder. Also, since moving in the house we had to keep lights on in all the rooms even during the day, as the rooms were very dark.

Several other things happened over the next 6 weeks until we couldn’t take it anymore and moved.

– More times than one could count, both she or I would be walking in the apartment, and feel someone was behind us. We would turn around, but nobody was there. (We didn’t share this with one another until after we moved).

– One night, I fell asleep on the couch and felt someone nudge me forcefully several times. I woke up and asked my wife what she wanted. I noticed that she was sitting across the room reading a book. I asked if she nudged me, and she said no. It was not a muscle twitch.

– Another time, we were in bed falling asleep, when we heard things crashing in the kitchen. I ran into the kitchen to see the trash can tipped over, and garbage strung all over the floor. It was apparantly forcefull shoved over, as trash was thrown from one end of the room to the other. There was now way the can could have fallen over on its own.

– Other things like cans plates, glasses, and bowls were tipped over on different occasions. When these things happened, a hot, rotten, sulfer-like odor would fill the room.

– The worst one was when I was at work one night. My wife was in the living room and my daughter was sleeping in the bedroom. The bedroom door suddenly slammed shut (against gravity), and locked. My wife was frantic.

She pulled and pulled but the door would not budge. She could smell the rotten sulfer odor coming from under the bedroom door. She yelled at the spirit, and demanded that it let her open the door. She heard the window slam shut, and the door opened. My daughter was safe in bed. That was the last major problem we had, but felt it was time to move.

7. We moved three weeks later, and it was the last time we set foot in the house. We put the experience behind us and started living a normal life in another house.

8. About 6-months later I met up with a friend that I hadn’t seen in over a year. (We were both in the military at the time). He informed me he had just finished moving. I asked if he was just moving into the area.

He said, he had been in the area for a month, but was just moving from one house to another. I asked where he was moving from and to. He said he was moving from a farm house on a mountain, to a house in town. I inquired where the house was. It turned out it was the same farm-house apartment that my wife and I have lived in not 6 months earlier. He suddenly became very serious and asked if we had “problems” while living in the house. I asked “what kind of problems ?”. He said “don’t think I’m crazy, but . . . . ” It turns out he and his wife had the same type

9. As for the school teacher. When my friend moved out of the house, he told the owners what problems he had. The landlady blew it off as foolishness, and said the school teacher gave a similar excuse. Apparently, the school teacher took off in the middle of the night carrying her keys, purse, and the clothes she had draped over a chair next to the bed. She drove straight through to her home state only stopping to eat or use the toilet.

She informed no-one of her sudden decision to leave, until 3-weeks later when the landlady called her parents to see if she may be there. She refused to talk about why she left, but only said that the landlady could keep her clothes and furniture, as she wanted sent to her. I would really like to find and talk to her.

10. It has been 19 years since that happened, and I still remember it as though it were yesterday. My wife and I have not researched the experience further, nor do we care to. We never have been or never will be into paranormal, or any kind of cultist activities. We did not go looking for an experience with a ghost, but one apparently came looking for us.