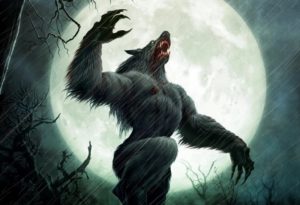 The key characteristic of the mythological human commonly known as a werewolf, or lycanthrope, is the ability to shape-shift into a wolf or an anthropomorphic wolf-like creature. Whether the result of a curse and/or lycanthropic infection or purposely achieved, the transformation is usually associated with the appearance of a full moon.

Though werewolves are generally a European centric character, their lore has spread throughout the world since their inception. Many other forms of shape-shifters are found in other cultures, some involving other animal forms than wolves.

Today, werewolves are a staple in fictional literature, though these modern werewolves differ from the original folklore. For instance, one of the current “well-known” attributes of werewolves, their vulnerability only to silver weaponry, is directly derived from modern fiction.

References to men changing in to wolves are found as far back as Ancient Greek literature and mythology. The Neuri, a tribe located north-east of Scythia, would transform into wolves once every year for several days then return to their human form according to Herodotus, an Ancient Greek historian.

Pausanias, a second century BC Greek geographer, relates the story of Lycaon, who was transformed into a wolf as punishment for the ritual murder of a child. Lycaon serves the boy’s flesh to Zeus trying to expose that he isn’t really a god. Thus, his punishment is for the crimes of murder and cannibalism.

Ovid and other Roman writers also mentioned stories of men who roamed the woods in the form of wolves. Pliny the Elder tells of a man who hung his clothes on an ash tree and swam across an Arcadian lake, transforming him into a wolf.

On the condition that he attack no human being for nine years, he would be free to swim back across the lake to resume human life. Another account he relates involves a man who was turned into a wolf after tasting the entrails of a human child, but was restored to human form 10 years later. Thus the history of western werewolves traces back to early societies.

There are a few common attributes given to werewolves by folklore, even in their human forms. These include the meeting of both eyebrows at the bridge of the nose, curved fingernails, low set ears and a swinging stride.

A method of identifying a werewolf while in its human form was to create a wound in their flesh. It was said that fur would be seen within the wound if the accused were a werewolf. Russian superstition said that werewolves could be identified by bristles under the tongue.

The physical features of werewolves in their transformed state varies between cultures, though they are said to be indistinguishable from ordinary wolves except for the definitive lack of a tail (a trait thought characteristic of witches in animal form), larger size, and it retains human eyes and voice.

Some Swedish accounts distinguished werewolves from regular wolves by the fact that they would run on three legs, extending the fourth leg out to resemble a tail. The return to their human forms is said to cause a period of weakness and debilitation accompanied by painful nervous depression.

Medieval European lore noted the universally reviled trait of devouring recently buried corpses, an extensively documented trait. There are also many other individual characteristics that can be found within specific cultures that aren’t necessarily widely held beliefs on werewolves.

The method of becoming a werewolf varies between cultures, but some of them are amazingly simple. The simplest method is to remove all clothing and put on a belt made of wolfskin, which probably acts as a substitute to wearing the entire animal skin as described in other accounts. Other methods involve rubbing the body with magic salve, drinking rainwater from the footprint of the animal, or drinking from enchanted streams.

Olaus Magnus, a 16th century Swedish writer, attributed a specially prepared beer to the initiation of Livonian werewolves. In Italy, France, and Germany anyone could become a werewolf by sleeping outside on a summer night with the full moon shining directly on their face, but only on a specific Wednesday or Friday. Other cases required a Satanic allegiance to sate the craving for human flesh.

The ability to transform through animal metamorphosis or send a familiar out as a messenger is also attributed to magicians, male or female. Witch superstitions closely parallel lycanthropic beliefs. Though some cultures believed it was a mundane curse, others believed it to be a divine punishment, from gods or the Devil, as in the case of Lycaon.

A notable exception to the association of Lycanthropy and the Devil comes from the rare account of an 80 year old man named Thiess who lived in Livonia in 1692. Thiess testified under oath that he and other werewolves were the Hounds of God, and he claimed they were warriors who went down into hell to do battle with witches and demons.

He also said that other werewolves in Germany and Russia did battle with the devil’s minions in their own versions of hell. For this he was sentenced to ten lashes for idolatry and superstitious belief as he was adamant in his testimony.

Becoming a werewolf through being bitten or scratched by another werewolf is a construct of modern horror fiction, but it was rarely featured in werewolf lore. Though the denotation of lycanthropy is limited to becoming a wolf-like creature, there is still no uniform definition of the change. The transformation itself may be temporary or permanent.

The were-creature may be the man himself or his double whose activity leaves the real man unchanged by all appearances, or possibly even his soul which goes forth seeking to devour while the body stays in a state of trance. It is also said to possibly be a messenger of the human being, a real animal, or a familiar spirit, with intimate connection to its owner causing any injury to it to correspond to the human being.

Unlike vampires, the list of weaknesses for werewolves is rather short. They aren’t generally thought to be harmed by religious artifacts or sacred ground. Most modern works include a vulnerability to silver, but this did not appear in werewolf stories before the 19th century, though retellings of some older stories, like that of the Beast of Gevaudan, have included silver bullets being used to kill them. There are however several remedies for lycanthropy.

Ancient Greeks and Romans believed that exhaustion would cure people of lycanthropy, so victims would be subjected to extended periods of physical activity in an attempt to purge them of the malady. Medieval Europe used the methods of medicinal treatment (usually with wolfsbane), surgically, or by exorcism.

A Sicilian belief stated that werewolves can be cured by striking it on the forehead or scalp with a knife, or by piercing the werewolf’s hand with nails. Simpler cures existed in Germanic and Danish cultures where simply addressing it three times by its Christian name and simply scolding it would provide a cure respectively.

Each individual culture seems to have a history of various were-wolf stories and many of them vary in styling. Many authors speculated that the story of werewolves may have originally been used to explain serial killings.

That theory is given some credence by the tendency of some serial killers to embrace activities that are very similar in nature to werewolves, such as cannibalism and mutilation. This idea is explored in several pieces of literature and film work. Until the 20th century humans were only occasionally attacked by wolves in Europe, but the attacks were very widespread.

Being feared such creatures scholars have suggested that it was inevitable that these predators were projected into folklore as evil shapeshifters. Evidence of this comes from the fact that areas devoid of wolves usually substitute another creature in its place such as werehyenas in Africa and weretigers in India. Other attempts to explain the source of the mythological creature list medical reasons for explanations.

Porphyria (a disorder that increases sensitivity), hypertrichosis (hereditary condition of excessive hair growth), Down’s Syndrome, and rabies have been suggested as reasoning behind the myth of the creature. However these reasons are disputed because certain facts don’t seem to match with the lore.

Porphyria was dismissed as the legends insisted that the werewolves no longer had human form, which the sickness would not have caused. Hypertrichosis is too rare a disease to have caused widespread occurrences and while rabies is very close to the definition, the idea that lycanthropy was a transmittable disease is rather new in the folklore of the creature.

There is a persistent belief that werewolves were actual creatures or inspired by encounters with actual creatures that is supported by subfossil remains discovered of giant lemurs in Madagascar which became extinct sometime after the settlement of the island. The settlers were in trade contact with Egypt and other places where the story was likely to be spread.

Werewolves, like vampires, have become a staple in modern fictional works. They persist in all manner of media from television to video games and literature.

Modern works tend to depict them as invulnerable to any weapons except those that are silver tipped and sometimes their abilities are present even in their human form. A recent trend pits werewolves against vampires in age old conflicts between the two creatures. Their popularity in popular fictional works seems to only increase with time so it’s safe to say that werewolves will be around in lore for many years to come.