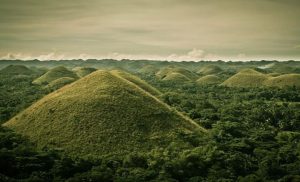 The Chocolate Hills in the Philippines are one of the main tourist attraction in the country because of their unexplainable nature, shape, and other fantastic myths surrounding them.

The Chocolate Hills of Bohol are giant molehills covered in green grass that turns brown when the dry season arrives. They are composed of limestone that has been corroded by rainwater across the years, and experts have labeled them as geological formation, although they admit they don’t understand clearly how they were formed. 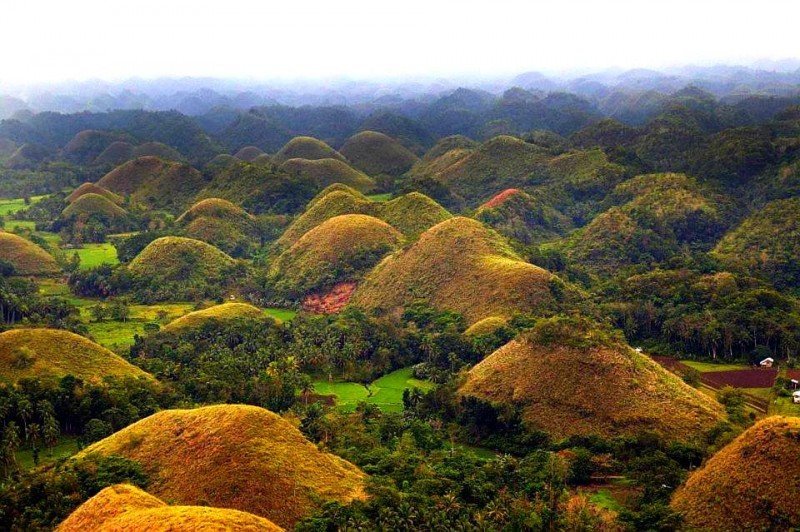 Because rainwater is believed to be the main shaping agent, experts presume that a series of underground rivers and caverns exist under these cone-shaped hills. This underground system extends each year due to the limestone dissolving as the rainwater pours down.

The Chocolate Hills are considered one of the seven natural wonders of Asia and they even feature on the province flag of Bohol. Because they are a huge tourist attraction, authorities are taking great care of them and complicate the situation for any archaeologist willing to dig beyond the convenient explanations offered by the so-called experts.

There have been various conspiracy theories involving the Chocolate Hills circulating on the internet. The most important of them revolves around their dome or pyramid shape, which further hints at their artificial nature.

Since no pertinent examinations have been conducted, people have been wondering if the hills ar not in fact the products of humans, or some other mythological beings. 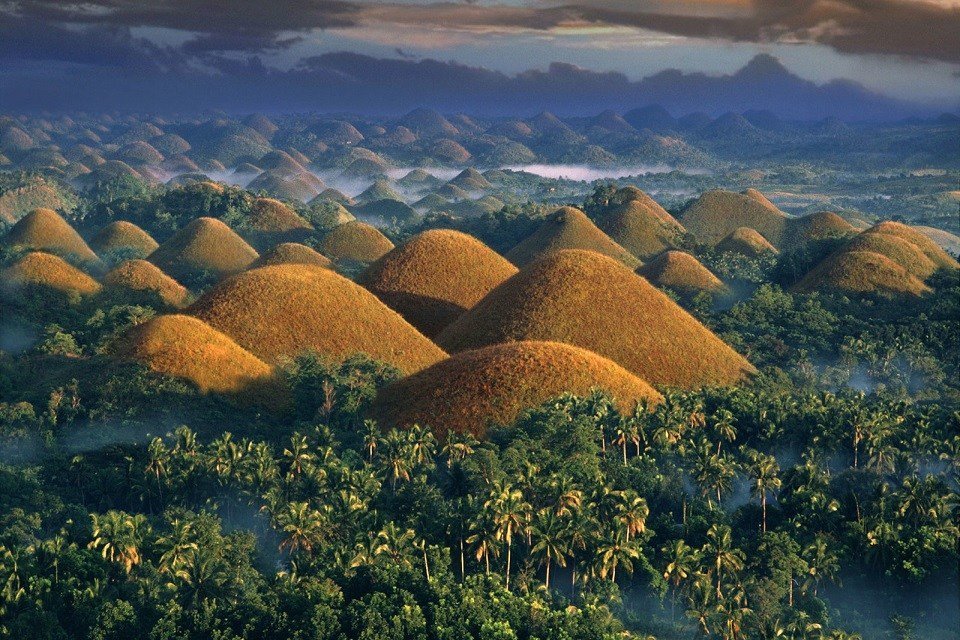 If we look at the Philipinese legends, they all speak of giants who either initiated a great boulder duel and forgot to clean up the mess, or another giant who cried his mortal mistress after she died, and his tears dried up and formed the Chocolate Hills.

While these are only folklore tales, they all speak about giants who ultimately gave rise to these unusual formations. So what could actually reside under these huge anthills?

According to one hypothesis, they may be burial mounds of the departed ancient rulers of this area. Asia is a place studded with pyramids, burial mounds, and imposing funerary art such as the Terracotta Warriors buried together with Qin Shi Huang, the first Emperor of China.

But why would the Philippines not want to unearth such a luxuriant heritage if it was really the case?

A possible answer is that what resides below these mounds would not be described with ease by our modern understanding, at least not without rethinking a large portion of history.

The content of the Chocolate Hills, if proven to exist, could involve anything from remnants of otherworldly beings to ancient unknown rulers, or even advanced technology.

If such a finding would be brought to light from beneath the Chocolate Hills, the powers governing us would not want the general public to find about it. Considering the scale of this site and the considerable number of tourists visiting it on a daily basis, there would be no chance for such a find to pass unnoticed.

A second hypothesis with more common sense describes the Chocolate Hills as natural formations, but not due to rainwater, but because of increased geothermal activity excerpted by the active volcanoes in the area. After all, the Philippines are located in the ‘Ring of Fire,’ the most seismically active region in the world.

Before further excavations are performed, we may not know their origins with certainty. Until that time comes, we can only guess on this matter. So, what do you think to be the case? Man-made? A giant’s work of art? Or maybe the volcanoes have created a masterpiece that’s yet to be understood by the unripe human mind?