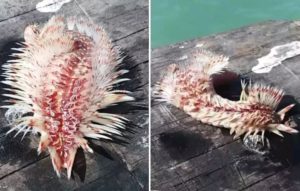 Bizzare footage shows the moment in which a puzzled fisherman confronts a spooky sea creature whose sting may cause agonizing pain for hours.

Alyssa Ramirez, who landed the baffling beast while fishing with her mother, initially believed she had pulled up a piece of seaweed when she reeled in her catch. But then she saw it squirming.

“When I didn’t feel any bites I assumed the fish had taken my bait – squid – and I reeled in my line to rebait the hook,” she said.

“At first glance I thought I snagged some seaweed. Then I laughed because that was definitely not a fish, nor seaweed.

“It was like an oversized earthworm ready for combat.”

After pulling up her line, Ms Ramirez filmed the creature squirming on the pier in Port Isabel, in the US state of Texas.

In her footage, the creature’s dangerous bristles fan in and out as its red and white body writhes.

Alyssa sent photos and videos to the Texas Department of Parks and Wildlife. They identified her enigmatic catch as a bearded fireworm – and Ms Ramirez should count herself lucky that she didn’t touch it.

The bristles, when flared, can penetrate human skin, injecting a powerful neurotoxin and producing intense irritation and a painful burning sensation around the area of contact. The sting can also lead to nausea and dizziness.