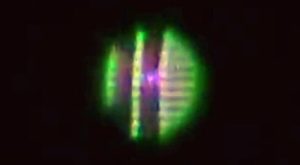 An incredibly colorful unidentified flying object (UFO) was observed in the sky by residents of the Canadian city of St. John. Eyewitnesses were lucky enough to capture this incredible sight on smartphones.

Well-known ufologist Scott Waring gave his assessment of this video. In his opinion, this is a real UFO, which, most likely, deliberately demonstrates itself in front of people.

Waring recalled that there are “ultraviolet” UFOs that are often observed in the area of ​​Mount Shasta (California), where, according to the ufologist, may be an ancient base of “religious” aliens.

In the video, the UFO is constantly changing its shape. Waring compares its shape to an angel and makes the assumption that it is actually a very ancient alien species that have evolved so much that they don’t even need flying machines to travel through the universe. Moreover, according to the ufologist, they are able to move both in space and in time.