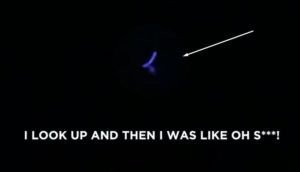 An unidentified flying object, spotted in the evening sky over Oahu on December 31, prompted witnesses to call emergency services. According to eyewitnesses, the UFO fell into the ocean.

Federal Aviation Administration officials say there were no accidents or accidents in the area at the time. But several witnesses reported seeing a large blue object falling from the sky into the ocean.

Not long after, a woman named Moriah spotted what looked like the same object passing over Princess Kahanu Estates.

“I look up and then I was like oh s***!,” she said. “I started calling my husband and them because they were all in the garage. I was like hey. Come look up there. See if you see what I see. They all said yea!”

The 38-year-old says she’s never really been a believer in UFOs, but the bright blue object had them so intrigued they jumped in the car and started following it.

The journey ended less than three miles from where it began. She says they stopped the car on Farrington Highway in front of the Board of Water Supply building after the object appeared to drop into the ocean.

In one of Moriah’s videos you can hear her say, “(It) went land in the water. Whatever it is.”

She described it as being larger than a telephone pole and says she never heard it make any sound.

“We called 911,” Moriah said, “For have like one cop or somebody for come out and come check em out.”

While officers were on scene Moriah says they spotted a second light.

“My husband went look up and he seen the white one coming,” she said. “The white one was smaller. Was coming in the same direction as the blue one.”

They lost sight of the object after it passed over a nearby mountain.

FAA spokesperson Ian Gregor said the agency received a report from police Tuesday night about a possible plane down in the area “but had no aircraft disappear off radars. And no reports of overdue or missing aircraft.”