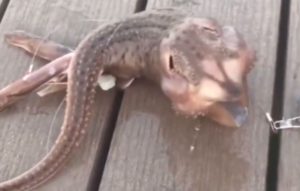 A weird sea monster caught by a fisherman has shocked the internet with people who can not explain it. The video shows the slimy creature with what seems to be an octopus-like tentacles.

But only three are visible when compared with the eight of an octopus. Mysterious fish also has a huge head with what seems to be a monstrous mouth and breath portals where the eyes should be.

The creature appears tiny, since it is no larger than the width of two wood planks.

Where the clip was taken is not known but it has been seen more than 1.3million times since Nataliia Vorobok posted it to TikTok. Viewers flocked to the comments section right away to share their opinions.

What else do the depths of the ocean hide from us?