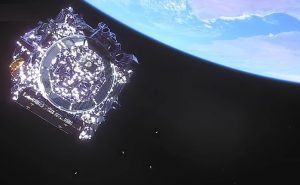 The European Space Agency has released footage of the Ariane 5 rocket, which captured the telescope as it receded, and this video is truly amazing. No, not a telescope is incredible, but just an incredible number of UFOs that literally flooded the earth’s orbit.

The three-minute live video shows Webb detaching from the rocket, retreating, and deploying the solar cell after 69 seconds.

Telescope is heading to a place located at a distance of about 1.5 million kilometers (slightly less than 1 million miles) from Earth, in an area called the Lagrange point, pompously writes about this event NASA, but completely “does not notice” the huge number of UFOs that have filled the orbit.

Of course, NASA will say that this is just ice that has fallen off the rocket, but we suggest you just watch the video and such explanations will only make you laugh.

Objects move in different directions, at different speeds, moreover, there are objects that first fly in one direction, but then stop and fly in the opposite direction.

It is simply impossible to explain this, since there are no winds in space.

Needless to say, uncontrollable chunks of ice or “space debris” are simply physically incapable of doing so.