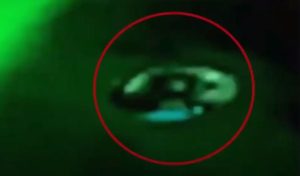 Awhile ago a cosmonaut aboard the International Space Station (ISS) captured footage of the auroras over the Antarctic when 5 UFOs appeared moving through space.

Now, another recent recording from the ISS live feed shows a disc-shaped UFO flying through the northern aurora, reports ufosightingshotspot.blogspot.com.

The short footage captured by Pedro Ramirez and edited by El Peleon Enmascarado starts at the moment the UFO comes into view.

Then, the camera zooms in following the UFO. By reducing the playback speed of the footage, the UFO becomes clearly visible.

More and more astronauts are coming forward saying that they have seen UFOs in space.

Watching this alien spacecraft then we know that they exist and that they are here, besides, this footage also confirms the statements of astronauts when they are talking about UFOs in space.