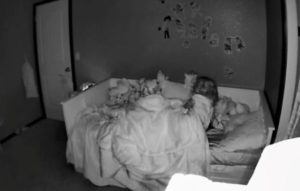 The eerie video for any parent was filmed at night by a baby monitor installed in the children’s bedroom. Who tried to talk to the girl? Ghost? Daemon?

Recently, a frightening video was posted on Reddit, filmed with a baby monitor in the bedroom of a little girl.

According to the video description, in the middle of the night, the child’s mother suddenly woke up with the unexpected thought that she urgently needed to check what was happening in her daughter’s bedroom. It was an “irresistible urge”.

“She was asleep, but then she sat on the bed and stared at the door. And after about 10 seconds, a strange voice appeared. Can someone decipher what he says?”, – asked author of the video.

To hear incomprehensible fragmentary words in the video, make the sound to the maximum. At the 10th second of the video, you can hear one word or a quick phrase, and then another.

About one and a half hundred comments were left to the video, and some of them were able to make out the word “baby”, which is already creepy enough, and also the word “Listen”.

“The voice is like a squeaky man who says ‘Listen’ twice, the second time faster, after which there is some kind of grunt,” writes one commentator.

According to the author of the video, the girl did not sit on the bed for long and listen to the voice, and soon she went back to bed and fell asleep.

When the next morning the mother asked her daughter what happened at night, the girl said that she did not remember anything about how she woke up, and even more so she said nothing about the mysterious whisper.