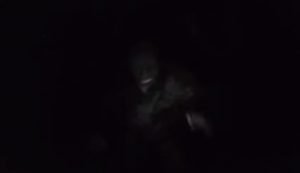 A footage has emerged that shows a supposed Bigfoot charging towards a boy who was walking in the woods, reports unexplained-mysteries.com.

The video, posted on October 20th to the YouTube channel ‘Lightroad 12,’ was filmed at night by a young boy walking through the woods with only a torch light to illuminate his way.

“A few weeks ago I spotted a Sasquatch figure near my school,” the introduction reads. “To have proof, I decided to go back and get a video.”

As the video goes on, a rustling noise can be heard and the boy says “what is that?” A couple of seconds later, a huge Bigfoot-like beast comes charging at him, prompting a hail of shouting as the boy makes a hurried retreat in the other direction.

“For people who are trying to research about my encounter, It happened around eight-thirtyish In a not too large woods. I heard some rattling in the bushes, and right when I turned to shine the light on the bushes, the bigfoot like creature jumped out.”, he later wrote.

“It did not chase me after I ran, it kind of just ran for a second then stopped and went back into the bushes. It was not bright outside so I couldn’t really see how tall it was, but it looked around seven feet.”

As for the genuineness of the footage-obviously there is no reason why the ‘ Bigfoot ‘ couldn’t just be someone in a costume, which means that the possibility of a hoax can’t be discounted.

You can check out the video for yourself below.