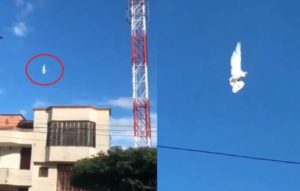 A bird was filmed apparently frozen mid-air in mysterious footage. The video was shot in a neighborhood of Tuluá Valle, in Colombia, on July 9.

The footage first shared by Twitter user “Hechizero” shows the white bird appearing to remain motionless with its wings spread apart in the sky above a two-floored house.

Passersby can be seen stopping and looking in amazement at the unusual sighting. As the camera zooms on the bird, it appears to be twitching.

The footage was shared onto Instagram by another user, who wrote in the post: “There is a static pigeon in the air next to a 5G antenna and there are apparently no wires nearby. Tuluá Valle.”

A self-proclaimed UFO expert, Scott C Waring, tried to explain what was really happening in the video and according to him it’s the “phenomenon of missing time.”

In a report for Et Database Waring said, ‘Now here is something you don’t see everyday. A white pigeon frozen in midair near a 5G tower. It’s like a time bubble was made by the 5G antenna and this poor pigeon was unlucky enough to get caught in it.’

“However we really don’t know what 5G towers will do. Of course the radiation exposure will increase, the static electricity in the area will increase, but what does it take to create a bubble in time…invisible to the naked eye, yet within it…all time slows down?”, Waring wrote.

Meanwhile, commentators have started to look for novel explanations; some suggested that in fact there were wires, while others have stuck to mysticism, suggesting a theory of parallel realities.