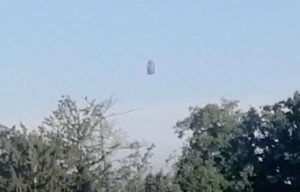 On the morning of July 25 in Switzerland, a local resident went out onto the balcony and could not believe his eyes. An oddly-shaped UFO hovered over the treetops.

The first thought was – a balloon of an unusual shape. Realizing in time, the man tried to capture the mysterious object, but after a few moments it simply disappeared.

When an eyewitness started filming a mysterious object, he initially decided that it was just a balloon and took the camera aside.

However, having returned the camera back, the unexpected guest had already disappeared. A balloon cannot disappear from sight in such a short period of time.

Renowned ufologist Scott C. Waring put forward his theory regarding this video. According to the ufologist, this UFO in its shape is very similar to the object that crashed near Keksburg in 1965.

Waring took a close look at the UFO captured on the video and stated that it was 100% real. However, no one can say with certainty what type of flying object it was.