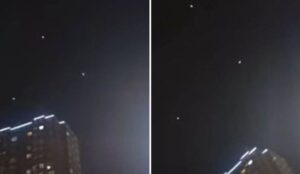 A resident of the Bronx (New York) on January 16, 2021 saw three UFOs above the houses in his area, moving synchronously in the form of a huge triangle. The brightly shining points were very clearly visible in the night sky.

The man managed to capture a triangle slowly floating in the sky on video (see below) and posted it on his YouTube channel.

The recording shows how the author of the video is very surprised by what is happening, he looks up into the sky and says “They fly nearby and look like stars. This is a triangle and I don’t know what it is.”

On social networks, this video caused a lot of comments from curious people who offered their versions of what they saw. From the fact that someone has programmed the drones to move in the form of a triangle, to the fact that they are actually Chinese lanterns.

The lantern version was quickly criticized, as the lights move at such a high altitude that Chinese lanterns could not continue to burn so brightly.

The drone version also drew a lot of criticism, because in order to launch several large drones over residential buildings in New York, you need to obtain special permission and it is not so easy.

The most popular theory was that it was a secret American TR-3B reconnaissance aircraft, about which there have been many rumors for a long time.

Allegedly, it was developed on the basis of an alien aircraft that fell in Roswell. Allegedly, TR-3B can move silently and is practically invisible to radars.

A UFO was again spotted over Popocatepetl, creating a strange portal