White House concern may possibly have resulted in an order to shoot down the UFOs, reported in various International News Service (INS) stories on July 29, 1952. E.g., one such story reported that “jet pilots have been placed on a 24-hour nationwide ‘alert against the flying saucers’ with orders to ‘shoot them down’ if they ignore orders to land.”

An Air Force public information officer, Lt. Col. Moncel Monte, confirmed the directive stating, “The jet pilots are, and have been, under orders to investigate unidentified objects and to shoot them down if they can’t talk them down.” 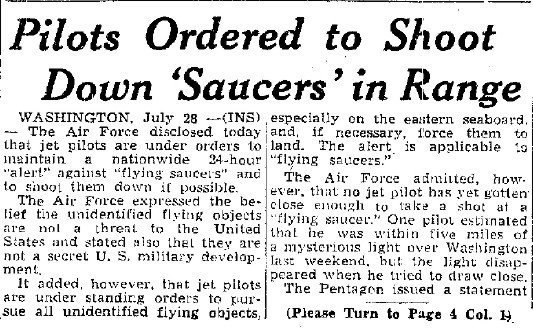 However, Air Force headquarters also put out statements that the unidentified flying objects were no threat to the United States and not controlled by “a reasoning body.”

In response to the INS “shoot-down” stories, to calm rising public anxiety and answer the news media’s questions about the sightings — and, hopefully, to slow down the numbers of UFO reports being sent to Blue Book, which were clogging normal intelligence channels — Air Force Major Generals John Samford, USAF Director of Intelligence, and Roger Ramey, USAF Director of Operations, held a well-attended press conference at the Pentagon on July 29, 1952.

Samford was heavily influenced by Capt. Roy James, who had discussed the sightings with him earlier in the day and who also spoke at the conference. Samford declared that the visual sightings over Washington could be explained as misidentified aerial phenomena (such as stars or meteors).

Samford also stated that the unknown radar targets could be explained by temperature inversion, which was present in the air over Washington on both nights the radar returns were reported.

In addition, Samford argued that the radar contacts were not caused by solid material targets, and therefore posed no threat to national security.

In response to a question as to whether the Air Force had recorded similar UFO radar contacts prior to the Washington incident, Samford admitted that there had been “hundreds” of such contacts where Air Force fighter interceptions had taken place, but stated they were all “fruitless.” The conference proved to be successful “in getting the press off our backs”, Ruppelt later wrote.

Among the witnesses who supported Samford’s explanation was the crew of a B-25 bomber, which had been flying over Washington during the sightings of July 26–27. The bomber was vectored several times by National Airport over unknown targets on the airport’s radarscopes, yet the crew could see nothing unusual.

Finally, as a crew member related, “the radar had a target which turned out to be the Wilson Lines steamboat trip to Mount Vernon… the radar was sure as hell picking up the steamboat.”

Air Force Captain Harold May was in the radar center at Andrews AFB during the sightings of July 19–20. Upon hearing that National Airport’s radar had picked up an unknown object heading in his direction, May stepped outside and saw “a light that was changing from red to orange to green to red again…at times it dipped suddenly and appeared to lose altitude.”

However, May eventually concluded that he was simply seeing a star that was distorted by the atmosphere, and that its “movement” was an illusion. At 3 a.m. on July 27, an Eastern Airlines flight over Washington was told that an unknown object was in its vicinity; the crew could see nothing unusual.

Their conclusion was that “a temperature inversion had been indicated in almost every instance when the unidentified radar targets or visual objects had been reported.” Project Blue Book would eventually label the Washington radar objects as “mirage effects caused by double inversion” and the visual sightings as “meteors coupled with the normal excitement of witnesses.”

Criticisms of the Air Force explanation

Captain Ruppelt noted that Major Fournet and Lt. Holcomb, who disagreed with the Air Force’s explanation, were not in attendance at Samford’s press conference. Ruppelt himself discovered that “hardly a night passed in June, July, and August in 1952 that there wasn’t a [temperature] inversion in Washington, yet the slow-moving, solid radar targets appeared on only a few nights.”

According to a story printed by INS, the United States Weather Bureau also disagreed with the temperature inversion hypothesis, one official stating that “such an inversion ordinarily would appear on a radar screen as a steady line, rather than as single objects as were sighted on the airport radarscope.”

Also, according to Ruppelt, when he was able to interview the radar and control tower personnel at Washington National Airport, not a single person agreed with the Air Force explanation.

Michael Wertheimer, a researcher for the government-funded Condon Report, investigated the case in 1966. He found that the radar witnesses still disputed the Air Force explanation, but that did not stop the report from agreeing with the temperature inversion/mirage explanation.

According to Ruppelt, when the Andrews control tower personnel looked they all saw “a huge fiery-orange sphere” hovering over the range station.

When Ruppelt interviewed the tower personnel several days later, they insisted that they had been mistaken and had merely seen a bright star. However, when Ruppelt checked an astronomical chart he found that there were no bright stars over the station that night, and that he had “heard from a good source that the tower men had been ‘persuaded’ a bit” by superior officers to claim that their sighting was merely a star.

There were also witnesses who claimed to see structured craft and not merely “glows” or bright lights. On July 19 an Army artillery officer, Joseph Gigandet, was sitting on the front porch of his home in Alexandria, Virginia, across the Potomac River from Washington. At 9:30 p.m. he claimed to see “a red cigar-shaped object” which sailed slowly over his house.

Gigandet estimated the object’s size as comparable to a DC-7 airplane at about 10,000 feet altitude; he also claimed that the object had a “series of lights very closely set together” on its sides. The object eventually flew back over his house a second time, which led Gigandet to assume that it was circling the area.

When the object flew away a second time, it turned a deeper red color and moved over the city of Washington itself; this occurred less than two hours before Edward Nugent first spotted the unknown objects on his radar at Washington National. Gigandet claimed that his neighbor, an FBI agent, also saw the object.

Dr. James E. McDonald, a physicist at the University of Arizona and a prominent ufologist in the 1960s, did his own analysis of the Washington sightings. After interviewing four pilot eyewitnesses and five radar personnel, McDonald argued that the Air Force explanation was “physically impossible.”

Harry Barnes told McDonald that the radar targets “were not shapeless blobs such as one gets from ground returns under anomalous propagation”, and that he was certain the unknown radar blips were solid targets; Howard Cocklin agreed with Barnes.