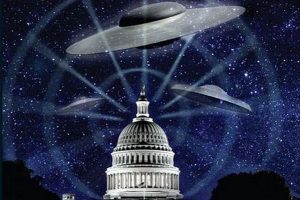 The objects were located 15 miles (24 km) south-southwest of the city; no known aircraft were in the area and the objects were not following any established flight paths. Nugent’s superior, Harry Barnes, a senior air-traffic controller at the airport, watched the objects on Nugent’s radarscope. He later wrote:

We knew immediately that a very strange situation existed . . . their movements were completely radical compared to those of ordinary aircraft.

Barnes had two controllers check Nugent’s radar; they found that it was working normally. Barnes then called National Airport’s other radar center; the controller there, Howard Cocklin, told Barnes that he also had the objects on his radarscope.

Furthermore, Cocklin said that by looking out of the control tower window he could see one of the objects, “a bright orange light. I can’t tell what’s behind it.”

At this point, other objects appeared in all sectors of the radarscope; when they moved over the White House and the United States Capitol, Barnes called Andrews Air Force Base, located 10 miles from National Airport.

Although Andrews reported that they had no unusual objects on their radar, an airman soon called the base’s control tower to report the sighting of a strange object. Airman William Brady, who was in the tower, then saw an “object which appeared to be like an orange ball of fire, trailing a tail . . . [it was] unlike anything I had ever seen before.”

As Brady tried to alert the other personnel in the tower, the strange object “took off at an unbelievable speed.” Meanwhile, another person in the National Airport control tower reported seeing “an orange disk about 3,000 feet altitude.”

On one of the airport’s runways, S.C. Pierman, a Capital Airlines pilot, was waiting in the cockpit of his DC-4 for permission to take off. After spotting what he believed to be a meteor, he was told that the control tower’s radar had picked up unknown objects closing in on his position.

Pierman observed six objects — “white, tailless, fast-moving lights” — over a 14-minute period. Pierman was in radio contact with Barnes during his sighting, and Barnes later related that “each sighting coincided with a pip we could see near his plane. When he reported that the light streaked off at a high speed, it disappeared on our scope.”

At Andrews AFB, meanwhile, the control tower personnel were tracking on radar what some thought to be unknown objects, but others suspected, and in one instance were able to prove, were simply stars and meteors.

However, Staff Sgt. Charles Davenport observed an orange-red light to the south; the light “would appear to stand still, then make an abrupt change in direction and altitude . . . this happened several times.”

However, when the jets ran low on fuel and left, the objects returned, which convinced Barnes that “the UFOs were monitoring radio traffic and behaving accordingly.” The objects were last detected by radar at 5:30 a.m. Around sunrise, E.W. Chambers, a civilian radio engineer in Washington’s suburbs, observed “five huge disks circling in a loose formation. They tilted upward and left on a steep ascent.”

The sightings of July 19–20, 1952, made front-page headlines in newspapers around the nation. A typical example was the headline from the Cedar Rapids Gazette in Iowa. It read “SAUCERS SWARM OVER CAPITAL” in large black type. By coincidence, USAF Captain Edward J. Ruppelt, the supervisor of the Air Force’s Project Blue Book investigation into UFO sightings, was in Washington at the time.

However, he did not learn about the sightings until Monday, July 21, when he read the headlines in a Washington-area newspaper. After talking with intelligence officers at the Pentagon about the sightings, Ruppelt spent several hours trying to obtain a staff car to investigate the sightings, but was refused as only generals and senior colonels could use staff cars.

He was told that he could rent a taxicab with his own money; by this point Ruppelt was so frustrated that he left Washington and flew back to Blue Book’s headquarters at Wright-Patterson AFB in Ohio.

Before leaving Washington, Ruppelt did speak with an Air Force radar specialist, Captain Roy James, who felt that unusual weather conditions could have caused the unknown radar targets.

At 8:15 p.m. on Saturday, July 26, 1952, a pilot and stewardess on a National Airlines flight into Washington observed some strange lights above their plane. Within minutes, both radar centers at National Airport, and the radar at Andrews AFB, were tracking more unknown objects.

A master sergeant at Andrews visually observed the objects; he later said that “these lights did not have the characteristics of shooting stars. There was [sic] no trails . . . they traveled faster than any shooting star I have ever seen.”

Meanwhile, Albert M. Chop, the press spokesman for Project Blue Book, arrived at National Airport and, due to security concerns, denied several reporters’ requests to photograph the radar screens. He then joined the radar center personnel.

By this time (9:30 p.m.) the radar center was picking up unknown objects in every sector. At times the objects traveled slowly; at other times they reversed direction and moved across the radarscope at speeds calculated at 7,000 mph. At 11:30 p.m., two jet fighters from Newcastle AFB in Delaware arrived over Washington.

Capt. John McHugo, the flight leader, was vectored towards the radar blips but saw nothing, despite repeated attempts. However, his wingman, Lt. William Patterson, did see four white “glows” and chased them.

Suddenly, the “glows” appeared to turn and surround his fighter. Patterson asked the control tower at National Airport what he should do; according to Chop, the tower’s answer was “stunned silence”. According to Patterson, the four “glows” then sped away from his jet and disappeared.

After midnight on July 27, Major Dewey Fournet, Project Blue Book’s liaison at the Pentagon, and Lt. John Holcomb, a US Navy radar specialist, arrived at the radar center at National Airport. During the night, Lt.

Holcomb received a call from the Washington National Weather Station. They told him that a slight temperature inversion was present over the city, but Holcomb felt that the inversion was not “nearly strong enough to explain the ‘good and solid’ returns” on the radarscopes.

Fournet relayed that all those present in the radar room were convinced that the targets were most likely caused by solid metallic objects. There had been weather targets on the scope too, he said, but this was a common occurrence and the controllers “were paying no attention to them.”

Two more jets from Newcastle AFB were scrambled during the night. One pilot saw nothing unusual; the other pilot moved towards a white light which “vanished” when he closed in.

A Capital Airlines flight leaving Washington spotted “odd lights” which remained visible for about twelve minutes. As on July 20, the sightings and unknown radar returns ended at sunrise.

The sightings of July 26–27 also made front-page headlines, and even led President Harry Truman to personally call Capt. Ruppelt and ask for an explanation of the sightings.

Ruppelt, remembering the conversation he had with Capt. James, told the President that the sightings might have been caused by temperature inversion, in which a layer of warm, moist air covers a layer of cool, dry air closer to the ground. This condition can cause radar signals to bend and give false returns. However, Ruppelt had not yet interviewed any of the witnesses or conducted a formal investigation.

CIA historian Gerald Haines, in his 1997 history of the CIA’s involvement with UFOs, also mentions Truman’s concern. “A massive buildup of sightings over the United States in 1952, especially in July, alarmed the Truman administration. On 19 and 20 July, radar scopes at Washington National Airport and Andrews Air Force Base tracked mysterious blips. On 27 July, the blips reappeared.”