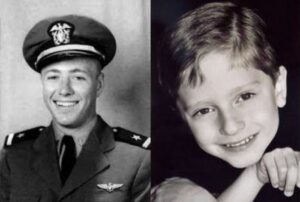 Six decades ago, a 21-year-old navy fighter pilot on a mission over the Pacific was shot down by Japanese artillery. His name might have been forgotten, were it not for then 6-year-old James Leininger.

Quite a few people — including those who knew the fighter pilot — think James is the pilot, reincarnated. James’ parents, Andrea and Bruce, a highly educated, modern couple, say they are “probably the people least likely to have a scenario like this pop up in their lives.” But over time, they have become convinced their little son has had a former life.

From an early age, James would play with nothing else but planes, his parents say. But when he was 2, they said the planes their son loved began to give him regular nightmares. 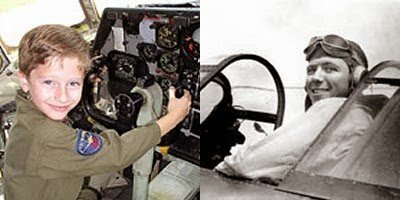 “I’d wake him up and he’d be screaming,” Andrea told ABCNEWS’ Chris Cuomo. She said when she asked her son what he was dreaming about, he would say, “Airplane crash on fire, little man can’t get out.”

Andrea says her mom was the first to suggest James was remembering a past life. At first, Andrea says she was doubtful. James was only watching kids’ shows, his parents say, and they weren’t watching World War II documentaries or conversing about military history.

But as time went by, Andrea began to wonder what to believe. In one video of James at age 3, he goes over a plane as if he’s doing a preflight check.

Another time, Andrea said, she bought him a toy plane, and pointed out what appeared to be a bomb on its underside. She says James corrected her, and told her it was a drop tank. “I’d never heard of a drop tank,” she said. “I didn’t know what a drop tank was.”

Then James’ violent nightmares got worse, occurring three and four times a week. Andrea’s mother suggested she look into the work of counselor and therapist Carol Bowman, who believes that the dead sometimes can be reborn.

With guidance from Bowman, they began to encourage James to share his memories — and immediately, Andrea says, the nightmares started become less frequent. James was also becoming more articulate about his apparent past, she said.

Bowman said James was at the age when former lives are most easily recalled. “They haven’t had the cultural conditioning, the layering over the experience in this life so the memories can percolate up more easily,” she said.

Over time, James’ parents say he revealed extraordinary details about the life of a former fighter pilot — mostly at bedtime, when he was drowsy. They say James told them his plane had been hit by the Japanese and crashed.

Andrea says James told his father he flew a Corsair, and then told her, “They used to get flat tires all the time.” In fact, historians and pilots agree that the plane’s tires took a lot of punishment on landing.

But that’s a fact that could easily be found in books or on television. Andrea says James also told his father the name of the boat he took off from — Natoma — and the name of someone he flew with — “Jack Larson.”

After some research, Bruce discovered both the Natoma and Jack Larson were real. The Natoma Bay was a small aircraft carrier in the Pacific. And Larson is living in Arkansas. “It was like, holy mackerel,” Bruce said. “You could have poured my brains out of my ears. I just couldn’t believe it.

Bruce became obsessed, searching the Internet, combing through military records and interviewing men who served aboard the Natoma Bay.

He said James told him he had been shot down at Iwo Jima. James had also begun signing his crayon drawings “James 3.” Bruce soon learned that the only pilot from the squadron killed at Iwo Jima was James M. Huston Jr. Bruce says James also told him his plane had sustained a direct hit on the engine.

Ralph Clarbour, a rear gunner on a U.S. airplane that flew off the Natoma Bay, says his plane was right next to one flown by James M. Huston Jr. during a raid near Iwo Jima on March 3, 1945. Clarbour said he saw Huston’s plane struck by anti-aircraft fire. “I would say he was hit head on, right in the middle of the engine,” he said.

Bruce says he now believes his son had a past life in which he was James M. Huston Jr. “He came back because he wasn’t finished with something.”

The Leiningers wrote a letter to Huston’s sister, Anne Barron, about their little boy. And now she believes it as well. “The child was so convincing in coming up with all the things that there is no way on the world he could know,” she said.

But Professor Paul Kurtz of the State University of New York at Buffalo, who heads an organization that investigates claims of the paranormal, says he thinks the parents are “self-deceived.”

“They’re fascinated by the mysterious and they built up a fairy tale,” he said. James’ vivid, alleged recollections are starting to fade as he gets older — but among his prized possessions remain two haunting presents sent to him by Barron: a bust of George Washington and a model of a Corsair aircraft. They were among the personal effects of James Huston sent home after the war.

“He appears to have experienced something that I don’t think is unique, but the way it’s been revealed is quite astounding,” Bruce said.

Asked if the idea that James may have been someone else changes his or his wife’s feeling about their son, Bruce said: “It doesn’t change how we think. I don’t look at him and say, ‘That’s not my boy.’ That’s my boy.”