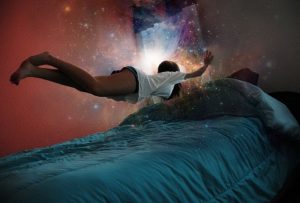 Have you ever found yourself thinking about a dream experience over and over again, even weeks— months— after it happened?

You keep telling yourself it was a dream, but all you can say about it is, “it just seemed so real.” Well, maybe it was. Sometimes dreams are not what they seem.

An out-of-body experience — often shortened to the initials OBE — is when your soul temporarily leaves your body. Some other terms for it include ‘astral projection’, ‘spirit walking’ or ‘soul travel’.

Many spiritual people of different cultures throughout the ages have believed that man’s nature is not exclusively physical, but spiritual. They believe that our body is but a shell and that our immortal spirit dons it something like a costume. At the end of one’s life, the spirit permanently leaves it behind.

Many believe that, in the midst of a lifetime, we can even shed that costume — the physical body – temporarily. The spirit can roam free for a while, independent of the body, and return back to it a short time later.

Everyone has OBEs every now and then without even trying; it’s a natural, safe phenomenon. Generally, in order to induce an OBE, you would have to become proficient at deep meditation, and be able to reach near trance-like states of consciousness, before your soul could leave your body.

Most of the time, you won’t even remember having them because by the time your soul goes back into your body, you’re still asleep and will forget by the time you wake up. Other times you will remember them, but probably pass them off as a dream because you knew you were here in your bed the whole time.

Telling the Difference between Dreams and OBEs

There are a lot of signs that a dream might not be a dream at all, but an OBE. The best and most scientific way to figure out if you had an OBE or a dream is to find independent confirmation of the things you saw and experienced.

For example, if you ‘dream’ you went to your grandmother’s bedside in a hospital and she was sick, but get a call in the morning that your grandmother had a heart attack, you probably didn’t have a dream at all, but an OBE.

If you ‘dream’ about your friend meeting with you at the park, and the next day you discover you both had the same dream—it’s not a coincidence. You both had OBEs and met at the park.

Sleep paralysis can sometimes accompany OBEs. Your consciousness may be rousing but you haven’t fully re-entered the body yet, therefore you’re having some difficulty in controlling it.

Another sign that an OBE has taken place is that it is generally much more vivid and lively than a dream. In dreams, people usually find their dream selves moving somewhat slowly, awkwardly, but in an OBE your movements are swifter and freer.

You feel as though you actually have control, unlike when you’re dreaming and you’re just a spectator to a sort of mental movie. In dreams we tend to focus on only certain images or sounds that seem to be randomly strung together.

During an OBE, it’s a little more like being awake — you’re experiencing sights, sounds and scents fairly simultaneously, as though you’re living in the moment.

If you sense you’re having an OBE, just go with it. It’s a great experience, and you may learn to look forward to your nightly travels.