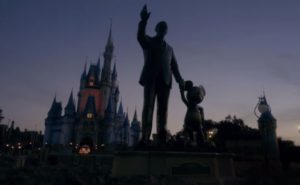 “The Happiest Place On Earth” Walt Disney World’s Magic Kingdom Theme Park in Orlando, Florida may as well be the creepiest place on Earth. The park itself is home to several spirits, and has been littered with the ashes of thousands of Disney enthusiasts upon their last requests.

Each year dozens of men and women conceal the urns and ashes of loved ones and secretly spread them about the park, which may be strictly forbidden, but isn’t stopping anyone either. Three of the parks most popular attractions hold claim to the spirits of those bodies who have passed on, yet never left.

Space Mountain is residence to a little blonde girl, often seen in the shadows and after hours on the cars when the park is closed. Several have seen her, yet when called out to she disappears into thin air. She has been seen being chased by the apparition of a young boy, and on several occasions the two have been seen riding together in empty seats.

The word “death” is somewhat of a no-no here at the Magic Kingdom, but like all places and theme parks in this world, tragedies do occur.

Keep your hands and arms inside the car at all times and please, don’t stand up inside Space Mountain. One man did and was decapitated. Disney likes to keep these kinds of things quiet, but I assure you it happened.

If you’ve been lucky enough to experience this ride, you know how low the tracks are above your head. Albeit a good time, I’m fearful of losing an arm or two in that place. In 2006 a 7 year old boy and a 73 year old man both fainted after (separately) riding the attraction, and died afterwards in a nearby hospital.

Several more deaths have been linked to this high speed indoor outer space themed roller coaster, mostly caused by heart attacks or seizure and the unfortunate souls usually end up passing away soon after in the local emergency room.

Also located in Tomorrow Land was an indoor/outdoor open car train ride called the SKYWAY that followed a track about 2 stories up. On either side is a platform for entering and exiting the ride.

An employee fell 40 feet to his death one morning when the ride was started up, he was sweeping and lost his balance, fell off the railing and hit a tree on his way down. This ride has since been shut down due to immature people who love to spit and throw items at other park guests. Sad but true. Growing up in Florida and visiting the park 3 times, I remember this ride fondly.

In 1977 a 6 year old boy drowned in the moat surrounded Cinderella’s castle. His parents sued and won a settlement for a lower than they had hoped $1.5 million, due to the fact that they had allowed their son to climb over a fence and play in the water, unsupervised.

In 1994, a 38 year old man playing the part of Pluto was run over and crushed to death backstage by a parade float.

Splash Mountain has claimed the life of a man who decided to exit the ride early. He stepped out of the log flume boat and onto the catwalk only to slip and lose his balance, and was crushed by an upcoming boat.

A ghostly apparition of man is seen waltzing through Cinderella’s Castle almost weekly. He appears as a tan colored shadow and has been photographed often. Many believe him to be the spirit of Walt Disney himself.

The attendants at The Pirates of the Caribbean ride cannot begin their daily operations until “George” has been greeted over the loudspeaker, and if they forget to bid him a good evening announcement as well, technically difficulty and ride malfunctions will occur.

The ride has been known to have been shutdown for days at a time with no known causes until George is pleaded with and asked for forgiveness. George is the spirit of an engineer who in 1970 fell to his death while welding in the Burning City located inside the attraction.

His ghost has been witnessed on security footage and by over 100 employees in the last 40 years. His presence is so heavy and the ride so dark and gloomy as it is, many employees prefer to skip out on operating it altogether. I hear the tea-cups are their best bet.

In 2005 a 77 year old woman lost consciousness and died on her trip through this attraction. What a way to go!

Unsurprisingly, The Haunted Mansion is the most spooked and the most popular among the deceased. In the early 1940′s, a gentleman in his private plane crash landed near the site, and ultimately drowned. He has come to call the mansion home, and is known to many as “the man with the cane.”

In the early 1950′s Walt Disney and engineers began drawing up plans for the Mansion and construction began on the both the Disneyland and Disney world versions in 1962. It was to be a grand colonialesque estate, complete with graveyard.

Halfway through it’s completion however, Walt Disney passed away and construction would be put on hold for several years. Planners basically could not decide on various aspects of design, and left it a skeletal structure behind boards and wooden planks. The site was a shock to many, and is rumored to have given one man a heart attack after peeking in at it’s ghastly appearance.

The Disneyland Mansion finally opened in 1969 as a French New Orleans style grand mansion, complete with Walt’s graveyard. The Disney World version was a tad different, based on the Gothic Revival era Mansions of old Pennsylvania and New York’s Hudson River Valley.

Today the Mansion is also haunted by the “man in the tuxedo” who has appeared as a shadow figure for many years. On her shift one evening, the attendant at the conclusion of the ride watched guests disembark from their “Doom Buggy’s.” She has a mirror in front of her so she can watch guests, but they can’t see her.

Hour after hour she repeatedly saw the shadowy figure of the man in a the tuxedo reflected in the mirror, standing behind her. As she finally made an attempt to seek him out, no one could be found. She returned to her post, only to instantly feel an icy cold hand on her shoulder that chilled her to the core. It is said she ran, all the way to the gates of the park, never to return to work.

The Haunted Mansion has, in fact, claimed one casualty. Every year Walt Disney World hosts a “Grad Night” for local graduating High School students. Recently, two boys rode along in their Doom buggy across the track suspended a story up across from the Seance Room part of the attraction.

Wanting to get a closer look, one of the boys hopped out of the car and jumped across to the catwalk along the mirrored glass. He unfortunately lost his step and fell 15 feet below, breaking his neck and dying instantly.

The Haunted Mansion is also known as the most popular place in the park to spread the ashes of those obsessive loved ones. Walt Disney is quoted as saying about his beloved Mansion “There will be spirits here, we haven’t gotten any yet, but they will come.”