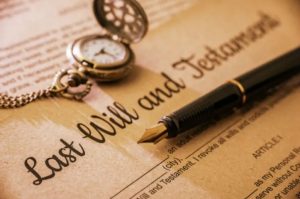 James L. Chaffin had four sons, John, James P., Marshall and Abner and a wife. In 1905, he wrote a will leaving everything to Marshall.

On January 16, 1919, he wrote a new will, a holographic one in his handwriting not witnessed. This type of will was valid in North Carolina.

Chaffin read Genesis, Chapter 27 which led to his decision to write a new will that divided his property equally among the four sons under the condition they take care of their mother. If one of the sons died, his children would equally inherit his share.

He secreted the will in his father’s Bible, telling no one about it. He sewed a note into his overcoat pocket directing his family to read the Genesis chapter in the Bible.

He was in an accident and died on September 7, 1921. The old will was uncontested. Marshall and his family inherited everything. Marshall died before the new will was discovered. His widow and children inherited the property.

In 1925, his apparition appeared to James at night. At first, it was silent. In June, Chaffin told James he would find the will in the overcoat pocket.

James went to his mother’s house to discover where the coat was. She gave it to John. On July 6th, James visited John, taking witnesses with him. They found the note, Bible and the new will.

This will was offered for probate to supersede the old one. Marshall’s widow and son contested it. Trial was set for December 1925. Ten witnesses would testify that the will was in Chaffin’s handwriting.

About a week before the trial, Chaffin appeared to James and asked where the old will was. The son believed this was a sign he would win the lawsuit.

When the widow and son were shown the new will, they decided not to contest it. The new one was probated.

Some believe that James was angry at being disinherited and forged the will, but the handwriting was definitely his father’s. Other thought the family knew about the new will. An attorney who was interested in parapsychology interviewed James, his wife, mother and daughter and came to concluded that they did not know of it.

The case was recorded in Proceedings of the Society for Psychical Research, 1927, 36, 517-24. This is the publication of the oldest and one of the most prestigious parapsychological organizations.

One theory is that James learned about this will by clairvoyance when his mind produced his father’s apparition. The problems with this are that there was a four year delay and that the message was about the note, not the location of the will. Chaffin appeared after the new will was discovered when James wouldn’t have needed to create his apparition.

Another theory is that James knew about the 1919 will, but forgot about it. Its existence was received telepathically. The information was received in dreams as a figment of his subconscious. This is unlikely because of the trouble Chaffin took to hide the will.

The last theory is that Chaffin’s apparition appeared to James. This supports survivalist theory. After the death of the physical body a part of the deceased survives and has intelligence as an apparition.

The four year lapse between Chaffin’s death and the appearance of his apparition is theoretical proof of survival after physical death.

The Victim’s Ghost: Did Teresita Basa Solve her own Murder?