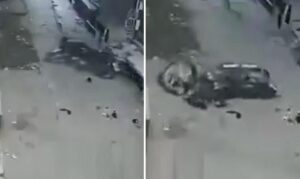 Of those, videos involving paranormal activities are the ones that make netizens not only baffled but also leave them scratching their heads. One such video has recently gone viral.

A video of a parked bike moving on its own and then falling to the ground abruptly has created a buzz on social media. The 30-second CCTV video was shared by Twitter user Amber Zaidi.

“Nobody would have believed this if it hadn’t been captured on camera,” wrote Twitter user while sharing the footage.

In the CCTV footage, two bikes can be seen parked on the street in front of a house. Few seconds into the video, one of the bikes began to move all by itself.

It moves in a circular motion and then falls to the ground abruptly. No human can be seen in the video.