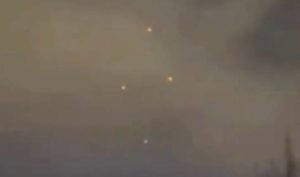 There was a major increase in UFO sightings in the US in 2020 and, over the last few months, many strange flying lights have been spotted in different parts of the country.

The latest addition to the list is the alleged sighting of the UFO in Las Vegas. A video posted to YouTube shows unidentified flying objects streaking through the sky in the most mysterious way.

The UFOs in the skies of Las Vegas hovered in the formation of diamond, illuminating their bodies. The set of orbs seems to be flying next to each other until they disappear in the sky.

“That there is an extremely high possibility that we are actually being visited by non-human lifeforms. Now non-believers let that set in,” commented Terry’s Theories, a YouTube user.

“That diamond shape was cool how it spun around,” commented Curtis Hill.

Many viewers say flying objects are likely to be alien spacecraft from deep space. According to alien researchers, advanced aliens have been exploring the planet for hundreds of thousands of years to study human activities.