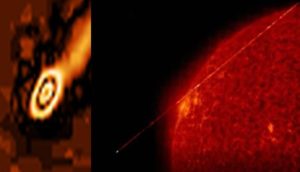 Regular sightings of a giant UFO circling our sun has sparked theories it is an alien mothership sucking solar energy from the massive star. At the same time, others say that aliens, on the contrary, change the activity of the Sun.

The remarkable event took place on November 1, 2020 and evidence that these kind of alien spacecraft not only flying extremely close to the sun, but they fire huge beams at the sun too.

Even though the reason is not known, it is said that intelligent aliens might survive by collecting, storing and harnessing the power of the sun.

Perhaps now it becomes clear that the unexpected activation of solar activity, when our star, which was at zero activity, suddenly “came to life” and began to throw out flares from the formed active zones (spots).