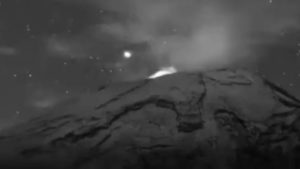 A security camera captured video of a mysterious glowing object coming out of an active volcano in Mexico. According to a UFO researcher, the object may be an alien spacecraft coming from an underground base.

The volcano depicted in a YouTube video posted by user Luis Andres Japersen is Popocatépetl, which is located in various states across Mexico. Local sources suggest that the volcano has shown increased signs of activity in the last few weeks and months.

The footage was initially intended to track the volcano’s activities due to its current condition. A bright oval-shaped object can be seen flying over the top of the volcano in one part of the original video.

Judging by the video, the mystery object seemed to have flown out of the crater of the volcano. The object continued to travel farther away from the volcano while retaining its brightness.

UFO expert Scott Waring of ET Data Base stated, that the unidentified object may be an alien spacecraft.

He declared that “this is just further proof that the alien base does exist and that the aliens living there have very large spacecraft.”

Since the entire crater of the volcano is about 600 meters across, Waring calculated that the object may be about 50 meters wide.