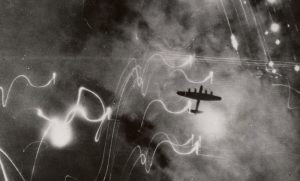 In 1935, Royal Air Force (RAF) wing commander Victor Goddard flew his Hawker Hart biplane from Andover to Edinburgh. It was a routine flight and Goddard thought he might be able to land along the way, perhaps at an old military airfield called Drem.

Things however don’t always go as planned, as Goddard approached Drem he could see the old airfield was in no condition to attempt a landing. The runways were in a state of total disrepair and the airfield appeared to have become prime grazing land for the local cattle population, Goddard continued on to Edinburgh.

On his return flight to Andover, Goddard encountered unexpected bad weather. Despite his extensive experience as a pilot, Goddard battled to keep his Hawker Hart in the air, at one point he reportedly came within 20 feet of crashing into the ground.

Visibility was almost zero as he continued on and the weather was getting worse. Even with the conditions, Goddard was able to see dark figures on the ground as he once again approached Drem field.

Suddenly Goddard flew into bright sunlight and Drem field was clearly visible below him. The Drem field he saw however was far different from what he had seen the day before. The airfield appeared to be new, the airstrips were in perfect condition, as were the hangers. Goddard observed 3 Avro trainer biplanes and one single wing plane that he could not identify.

Some of the planes were painted yellow with RAF insignia, the crew members walking around the airfield were dressed in blue uniforms. No one seemed to notice Goddard’s plane as he flew over despite the fact that he was flying very low.

Goddard was about to fly out of the Drem airspace and looked ahead only to see that he was about to fly back into the intense storm that he had just exited. Goddard flew through the storm and made it back to Andover where he landed safely, then he began to think about what he had seen.

The problem with what Goddard claimed to have seen on his return flight over Drem, besides the airfield being restored in a matter of hours, is that what he saw did not exist in 1935. The RAF ground crews in 1935 wore Khaki color uniforms not blue.

The RAF had no planes painted yellow and they had no single winged aircraft. It was not until 2 years later, 1937, that a single winged plane, painted yellow, was added as a training plane for spitfire fighter pilots, and the RAF crews began wearing blue uniforms.