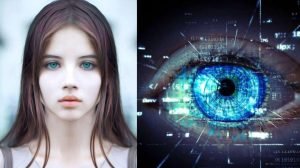 Veronica Seider’s superpower sounds like the plot of a movie. Veronica has vision that redefines the capabilities of the human eye. While some people squint to read close enough, Veronica is able to see miles into the distance.

Veronica Seider was born in 1951 in West Germany. Like any other German child, Veronica went to school and was later enrolled in West Germany at the University of Stuttgart.

The university learned about her unusual optical abilities, which attracted the attention of the general public.
Based on the results of their tests, the university stated that Veronica can see up to a mile away, that is, 1.6 km and even more.

Compared to the average person who can barely see details at a distance of 15 meters, Veronica could see details from a mile away. Her visual abilities are 20 times higher than those of an ordinary person.

She can easily distinguish people over a kilometer away, and can also measure their relative distance from her position.

Apart from this, Veronica’s vision can also be compared to a telescope. She claims to see the colors that make up a frame on a color TV.

Despite possessing superhuman powers, Veronica pursued her dream of becoming a dentist in West Germany. Along with her choice of profession, Veronica chooses to live like a normal person, which has prompted her to remain anonymous.

Until now, people with such vision have not been found in the world, that is, this can be considered some kind of genetic anomaly.

Veronica holds a world record (included in the Guinness book) for “the smallest visible object.”

She wanted to live like a normal human being along with her choice of her profession, and her lifestyle. Because of this she has tried to remain anonymous.

From Veronica Seider we can learn a number of life lessons.

– Our bodies are capable of extraordinary feats. Super human abilities are not soley confined to movies as we can see Veronica is otherwise a normal person – yet she has extra human abilities.

– As humans around the world we should make sure we communicate and work together with those who have a rare ability. Not to treat them as an oddity but to team up with them to explore their gifts more in the interests of our species.

– She teaches us that one can lead a normal life whilst being in possession of super-human abilities – she chose to be a dentist though she had such amazing abilities.

Fulcanelli: The Mysterious Alchemist of 20th-century