Many ancient texts remind of the fabled giants, but they are also heard of in folklore tales from different parts of the world. Probably the most renowned document attesting these mystic beings is the Bible, where it’s mentioned about Goliath, Og and the Nephilim.

These giants were clearly not suffering from any disease, because they lived for a great span of time, and performed incommensurable deeds. 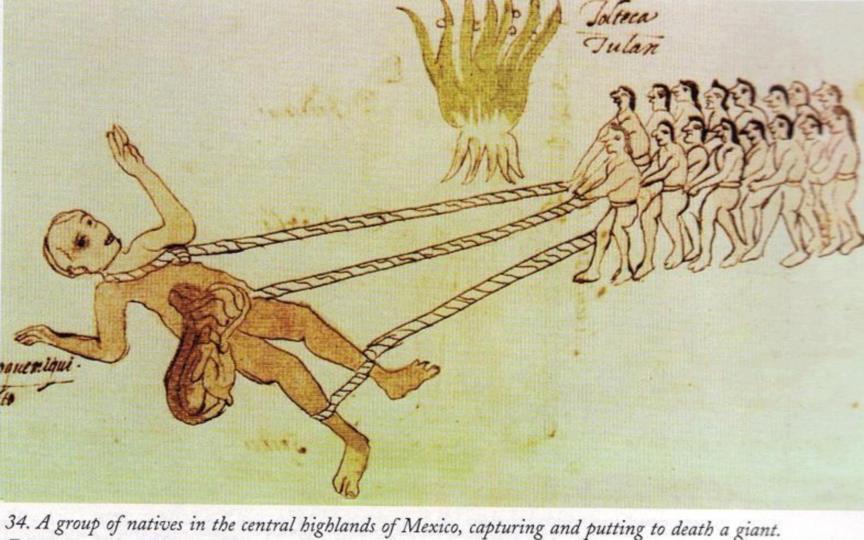 We don’t see many living giants now, and this could be in part because they were wiped out by humans across the millennia. However, records dating back a few hundreds of years remind of the time when the Europeans met one of these gigantic beings.

Codex Rios, also known as Codex Vatican A, is a manuscript which compiles translations from earlier texts written during the Spanish colonial era.

It features an intriguing illustration of a group of Aztec warriors subduing a gigantic humanoid with it’s bowels on the outside. The bottom of the drawing reveals its name – Quinametzin, translated as ‘One of the Old Ones.’ 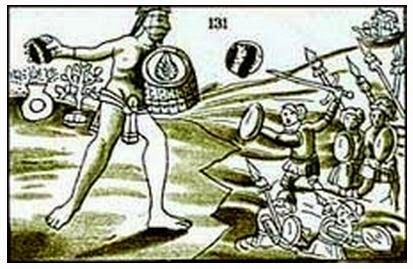 This proves the Aztecs had defined notions of giants, and could have even encountered them during their lives. In fact, the book ‘Broken Spears’ written and translated by Miguel Leon-Portilla speaks of such a confrontation.

During the Spanish conquest, between 1519 and 1521, the conquistadors had reached the gates of Tenochtitlan and were about to plunder it, but an unexpected foe met them with huge boulders thrown from behind the fortification. A giant Aztec hero known as Tzilacatzin was helping the Aztec forces to drive back the conquistadores.

Although the city-state of Tenochtitlan fell in the end, the giant hero caused severe damages to the Spanish before his demise. Because he was capable of throwing boulders from atop the walls, he outstrips the capacity of regular humans, and can be considered indeed a giant, probably one of ‘The Old Ones.’

Aztec mythology speaks of the Quinametzin Giants, the dominant race of the previous era. According to these beliefs, the Quinametzin raised the ancient citadel of Teotihuacan (place where men become gods,) and the Great Pyramid of Cholula.

Mythology reminds of 10 Quinametzin who allegedly made contact with the Mesoamericans and helped them erect some of their imposing structures. This would explain a lot, wouldn’t it?

There may be no more giants living today, at least not that we know of, but they remain in the memory of those who still tell the stories heard from their ancestors. There are also numerous sites with giant bones unearthed all across the world, but they are quickly suppressed or lack an official explanation.

The last record of a living giant is that of the Romanian boxing legend ‘Gogea the Mith,’ the giant who was over 8 feet tall and was about to conquer America at the beginning of the 21st century. However, he died in mysterious circumstances just before his planned visit to the US.

With so much evidence about giants, it’s hard not to believe in their existence. It’s not to be denied that someone may also be trying to conceal this long-forgotten reality. The reasons? Unknown…