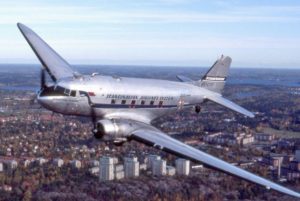 Is it possible a person can be here one minute and then totally disappear the next, never to be seen or heard from again? There are those who would say yes for they claim to be witnesses to just such a phenomenon. But where do these disappearing people GO?

How is it they seem to defy the very laws of nature as we know them? Sometimes logic cannot explain away an event, and we like to label it a mystery. Perhaps one day we’ll have answers, but for now we are only shrouded in questions.

On June 29, 1968, the Purdue Aviation Corporation charter flight was carrying 23 passengers from Kanee, Illinois to a national Lion’s Club convention in Dallas, Texas. It was a clear summer day without a cloud in the sky.

Somewhere over Rolla, Missouri, Jerrold I. Potter excused himself to use the restroom and proceeded to make his way to the rear tail section of the plane. Mrs. Potter watched her husband walk down the aisle as he stopped to briefly chat with James Schaive, president of Lion’s Club in Ottawa, Illinois.

She then turned to watch the beautiful scenery below. She never saw her husband again, dead OR alive. After a few minutes the plane seemed to shudder for only a few seconds and as it seemed to be only passing turbulence, no one paid it much attention.

But when Mr. Potter hadn’t returned after what had seemed an undue length of time Mrs. Potter grew concerned.

She asked a stewardess to please check the lavatory for her husband. At about the same time, pilot Miguel Raul Cabeza noticed one of the “DOOR OPEN” warning lights was flashing. He asked the co-pilot Roy Bacus to investigate.

Not wanting to cause concern among the passengers, Bacus calmly walked to the rear of the plane. On the way, the same stewardess Mrs. Potter had spoken with, informed Mr. Bacus a passenger may be missing.

The co-pilot surveyed the rear and found that indeed the exit door near the lavatory was slightly ajar, the same door the flashing warning light had indicated. Since the DC-3 wasn’t pressurized, the cracked door hadn’t caused any noticeable problems.

Mr. Bacus found a chain used to keep the emergency door closed lying on the ground. He then reported his findings to the captain who speculated that when the plane was shaken, Mr. Potter had probably fallen against the door and when the safety chain broke, fallen out of the aircraft.

But in a later report, it was noted that just because the chain had broken, the cumbersome emergency door handle still needed to be turned 180 degrees, and while this particular door handle was often a little harder to budge than the other hatchways, it would have been even harder to open in flight.

No one had seen Mr. Potter fall, nor did they hear a scream or even any kind of commotion. One person said, “..it was as if he just vanished. One minute he was there, the next he was gone.” Did Mr.Potter commit suicide then?

Friends and family firmly rule that possibility out. He was, by all accounts, a happy person with a comfortable life and good friends. So what DID happen to Jerrold I.Potter?

After making the discovery of the chain, the captain requested permission to land, and did so in Springfield, Missouri. An intensely thorough search was made for Mr. Potter along the DC-3’s flight path, but his body was never found, nor were any clues as to what might have happened.

The Legend of Cursed Cauldron of Lincolnshire

Cursed Goddess of Death: Ancient Statue That Kills Whoever Touches It