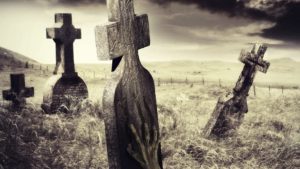 There are at least five suspected cases of vampyres that lived in Little Rhody. Some are, most likely, legends. Many people were convinced Mercy Brown was not.

There is a legend from the 1700s about Snuffy Stukeley or Stukely “Snuffy” Tillinghast, depending on the source, and his family. He was a prosperous Exeter farmer who had fourteen children. One night he had a dream that half of the trees in his orchard died. He believed it was an ill omen.

Not long after his dream, his eldest daughter, Sarah, died. Soon other children got ill and told Snuffy Sarah visited them at night and pressed on their chests. Neighbors convinced the farmer to dig up the bodies of the six who had died while the seventh was sick.

Sarah was found to have fresh blood, so her heart was burned. Snuffy’s children were re-interred. Accounts vary of how many died. Some say six died, others, the seventh died and there are documents indicating only four died.

In 1827, Captain Levi Young’s daughter, Nancy, was exhumed after others in the family got sick. Her body was burned. In 1874, William Rose, of Peacedale, believed his dead daughter, Ruth Ellen, was a vampyre. Her heart was burned.

In 1889, Nelly Vaughn was buried in a cemetery in West Greenwich. There’s a legend that her grave is cursed and nothing will grow on it. An epitaph on Nelly’s gravestone indicates she is waiting and watching for “us.”

There were accounts in the Providence Journal about Mercy. She died in the winter of 1892 after her mother and sister had predeceased her in the1880s. Mercy’s body was put into a crypt in Exeter. The ground was frozen and digging a grave was impossible. All three died of a mysterious illness.

People began to report seeing her. Mercy’s brother, Edwin, became sickly and moved to Colorado to be cured. He had been strong and healthy. Edwin was there when Mercy died. He returned to Rhode Island, but his health was declining.

Friends and family believed that a vampire was draining him of blood. They decided to exhume mother Mary, and daughters Mary Olive and Mercy. Both Marys were skeletons. Mercy had blood in her body and her corpse was not in the same position as it was when she was placed in her coffin.

To them, it proved she was a vampyre. Her heart was burned and the ashes were given, mixed with medicine, to Edwin to cure him. He died two months later.

People throughout Europe and in Ireland believed in the existence of vampyres. The belief dates back to ancient Rome and Greece. There was an epidemic of vampyre trials in the Continent in the 1600s and 1700s. The practice of burning its heart is unique to New England.

The Pennsylvania Dutch believe in the opnea which is a wasting away of the body that it is caused by a hex. PowWow doctors can cure this. PowWow is their magickal system. Could this and the sicknesses the Rhode Island vampyres had been a form of a physical disease such as tuberculosis? Some resources state that the Browns who died had tuberculosis.

Maybe, there is a scientific explanation for corpses not deteriorating…. Mercy Brown is the last recorded vampyre case in Rhode Island. Or, could it be that vampyres just might exist?