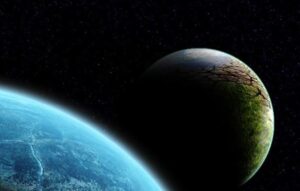 As Nibiru draws near, the number of whistle-blowers willing to break silence seems to have grown exponentially, despite hazards to their safety, reports ibtimes.sg.

A former United States Geological Survey (USGS) climatologist, Dr. Ethan Trowbridge, joins the growing list of brave men and women who have broken vows of silence and violated non-disclosure agreements to speak out against the most diabolical cover-up in human history.

Dr. Trowbridge earned his degree at Iowa State University. His credentials include fourteen years’ employment at the USGS, a government sponsored scientific agency which studies the Earth’s landscape, its natural resources and, most importantly, natural hazards that threaten it.

The USGS is run by the Department of the Interior; it is that department’s sole scientific branch. Its duties include cataloging and analyzing earth changes associated with gradual and drastic climate change.

During his tenure with this often misunderstood agency, Dr. Trowbridge supervised its geomagnetism program and core sciences division. He also learned about a celestial danger often called Nibiru, a term linked to a solar system consisting of a brown dwarf star and seven orbiting planets.

Trowbridge’s testimony supports the contentions of renegade astronomer Paul Cox and discredited NASA scientists, all of whom agree the celestial interloper poses grave danger to Earth.

According to Dr. Trowbridge, the USGS and NASA have been aware of Nibiru for at least thirty years, and together, along with other government agencies, have conspired to conceal Nibiru’s existence.

“I won’t repeat the same doom and gloom spoken by other whistle-blowers,” Dr. Trowbridge said. “The USGS learned about Nibiru after NASA. When we presented so many reports detailing abnormal climate change, they, with permission I guess, filled us in on what’s really going on.”

“This information is highly compartmentalized. I think maybe forty or fifty have any idea what’s happening. The rest are kept in the dark, fed lies. We, those who know, are sworn to secrecy. The Earth is in peril right now. And Nibiru is why,” Dr. Trowbridge said.

Dr. Trowbridge lambasted the USGS for perpetuating the cover-up, but doesn’t absolve himself of responsibility. The USGS, he said, concocted elaborate lies to hide the true nature of radical climate changes linked to Nibiru’s approach.

For example, he attended meetings during which senior White House personnel and NASA scientists collaborated with the USGS in engineering another of mankind’s stunning cover-ups: to blame inexplicable climate change on man’s over-reliance on fossil fuels and other imaginary causes, like releasing chlorofluorocarbons into the atmosphere.

“I live in the Adirondacks, at about 2000 feet altitude,” Dr. Trowbridge said. “On average, this area received maybe one day a year where the temperature climbs to ninety degrees. This year, five so far. Explain that? Also, the north-east is known for an abundance of rainfall during April, May, and to some extent, June, four inches per month, or thereabouts.

“This year, half that. To top it off, we had no snow last winter, and we’re talking about an area that typically has four feet of snow the ground the first week of April. And this is just my small corner of the world. This is happening across the globe.”

When asked about Nibiru’s ultimate impact on our environment, Dr. Trowbridge replied, “Nibiru will ravage the Earth.”

Meanwhile, NASA had assured people that Nibiru was an “internet hoax”.

Remains of ‘Baby Nessie’ washed up on British coast