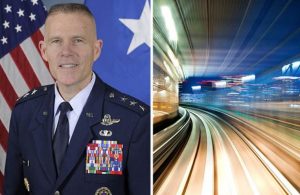 Kwast’s lecture included statements that strongly suggest that the U.S. military and its industrial partners may have already developed next-generation technologies that have the potential to completely change the field of aerospace and human society forever.

Around the 12:00 mark in the video, Kwast makes the rather bizarre claim that the U.S. already has new technology that could replace existing aerospace capacity:

“The technology is on the engineering benches today. But most Americans and most members of Congress have not had time to really look deeply at what is going on here. But I’ve had the benefit of 33 years of studying and becoming friends with these scientists.”

“This technology can be built today with technology that is not developmental to deliver any human being from any place on planet Earth to any other place in less than an hour.”

Kwast’s comment is just one of of a few interesting comments made recently by the military leadership, and they do seem to claim that we could be on the precipice of a major transportation technology leap.

Many conspiracy theorists believe that the crafts of the Space Force, despite not being an official organization have already been seen in the skies above the US.

Mystery as giant stone road resurfaces from beneath the Pacific Ocean