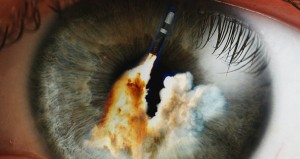 The Stargate Project was the umbrella code name of one of several sub-projects established by the U.S. Federal Government to investigate the reality, and potential military and domestic applications, of psychic phenomena, particularly “remote viewing”: the purported ability to psychically “see” events, sites, or information from a great distance.

These projects were active from the 1970s through 1995, and followed up early psychic research done at The Stanford Research Institute (SRI), The American Society for Psychical Research, and other psychical research labs.

Information in the United States on psychic research in some foreign countries was sketchy and poorly detailed, based mostly on rumor or innuendo from second-hand or tertiary reporting, attributed to both reliable and unreliable disinformation sources from the then Soviet Union.

Despite the dubious origins of much data, the CIA and military intelligence decided they should investigate and know as much about it as possible. Various Sub-Programs were approved yearly and re-funded accordingly. Reviews were made semi-annually at the Senate and House select committee level. Work results were reviewed, and remote viewing was demonstrated with the results being kept secret from the “viewer”. It was thought that if the viewer was shown they were incorrect it would damage the viewer’s confidence and skill. This was standard operating procedure throughout the years of military and domestic remote viewing programs. Feedback of any kind, back to the viewer was very rare. It was kept classified and secret.

Remote viewing attempts to sense unknown information about places or events. Normally it is performed to detect current events, but during military and domestic intelligence applications viewers claimed to sense things in the future, experiencing precognition.

The Stargate Project created a set of protocols designed to make researching clairvoyance and out-of-body experiences more scientific, and minimize as much as possible session noise and inaccuracy. The term “remote viewing” emerged as shorthand to describe this more structured approach to clairvoyance. Stargate only received a mission after all other intelligence attempts, methods, or approaches had already been exhausted. At its peak, Stargate had as many as 14 labs researching remote viewing

It was also reported that there were over 22 active military and domestic remote viewers providing data. When the project closed in 1995 this number had dwindled down to three. One was using tarot cards. People leaving the project were not replaced. According to Joseph McMoneagle, “The Army never had a truly open attitude toward psychic functioning”. Hence, the use of the term “giggle factor” and the saying, “I wouldn’t want to be found dead next to a psychic.”

When gathering intelligence misinformation can be more dangerous than no information at all. See: CIA informant Rafid Ahmed Alwan, Nurse Nayirah and “What We Say, Goes!” How Bush Sr. Sold the Bombing of Iraq by Mitchel Cohen.

In 1995 the project was transferred to the CIA and a retrospective evaluation of the results was done. The CIA contracted the American Institutes for Research for an evaluation. On June 30, before the AIR review was to begin, the CIA closed the Stargate project. An analysis conducted by Professor Jessica Utts showed a statistically significant effect, with gifted subjects scoring 5%-15% above chance, though subject reports included a large amount of irrelevant information, and when reports did seem on target they were vague and general in nature.

Ray Hyman argued that Utts’ conclusion that ESP had been proven to exist, especially precognition, “is premature and that present findings have yet to be independently replicated.” Based upon both of their collected findings, which recommended a higher level of critical research and tighter controls, the CIA terminated the 20 million dollar project, citing a lack of documented evidence that the program had any value to the intelligence community. Time magazine stated in 1995 three full-time psychics were still working on a $500,000-a-year budget out of Fort Meade, Maryland, which would soon close up shop.

According to The Ultimate Time Machine by Joseph McMoneagle and Reading the Enemy’s Mind: Inside Star Gate America’s Psychic Espionage Program by Paul H. Smith, examples of confirmed future targets being sensed by Stargate remote viewers include:

The predicted launch date for a newly constructed submarine months before it actually rolled from its construction crib and into the harbor by Joseph McMoneagle. McMoneagle guessed the submarine would be launched about four months later, sometime in the month of January 1980. Satellite photos confirmed this in mid-January 1980 According to Paul H. Smith, McMoneagle predicted several months in the future.

The predicted release of a hostage in the Middle East and a correct description of the medical problem precipitating his release. The information was provided three weeks before the hostage takers made their decisions.

This conclusion seems to be associated with the following text: “When one of the hostages was released early because of medical conditions and shown the information we [remote-viewers] had accumulated, he was enraged. In his mind, the only way we could possibly had such accurate information, would be to have someone inside the embassy with the hostages…”

The information given by Keith Harary, at SRI, the Stargate Project, was: “He seems to be suffering from nausea. One side of his body seems damaged or hurt. He will be on an airplane in the next few days.” The target turned out to be the hostage Richard Queen, held by Iranian militants and now desperately ill with symptoms including muscle weakness, lack of coordination, difficulty in vision, spasticity, vertigo, facial numbness, tremor, and emotional lability, multiple sclerosis, that affected his nerves on one side.

In part due to his input, Harary says he was later informed by contacts at SRI, President Carter dispatched a plane to bring Queen home. There is no reference to a three week prediction. There is no mention of the Iran hostage crisis (November 4, 1979 – January 20, 1981) or this incident in the 1984 book, The Mind Race: Understanding and Using Psychic Abilities, by Russell Targ and Keith Harary, which centers around remote viewing experiments and SRI.

Upon reading of the May 17, 1987, attack on the frigate the U.S.S. Stark in The Washington Post, Paul H. Smith became convinced that his remote viewing, three days earlier, of an attack on an American warship, including the location, the method, and the motive, was precognition. The American Warship “viewing” session was around 30 pages long, including writing and sketching of ships, parts of ships, map-like diagrams, etc.

In regards to Domestic Applications of what would become Remote Viewing, various field testings in remote viewing was done in the mid-1970s. In a particular well known serial crime incident, a single lone suspect in question was later captured by law enforcement and put into prison.

About twenty years later the original lone suspect changed his confession, and verified almost exactly to what was remote viewed by those domestic remote viewer(s). On the eve of reopening this case, the FBI stepped in, and asked that the case be put on hold. This case has been upgraded to Classified, with no indication at this time that it will be reopened . This noted case has been published and later suggested by name in the movie Suspect Zero.