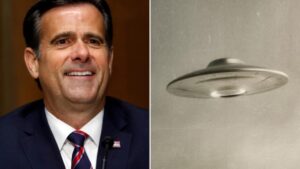 A former US national intelligence director has claimed that a report will be released soon declassifying several “difficult to explain” UFO sightings.

“There are instances where we don’t have good explanations for some of the things that we’ve seen, and when that information becomes declassified, I’ll be able to talk a little bit more about that,” former Director of National Intelligence John Ratcliffe told Fox New’s Maria Bartiromo on Friday.

John Ratcliffe, who spent eight months as the Trump adminstration’s intelligence director, spoke to US media ahead of an upcoming government report on “unidentified aerial phenomena”.

“Frankly, there are a lot more sightings than have been made public,” he said.

“Some of those have been declassified.

“And when we talk about sightings, we are talking about objects that have been seen by navy or air force pilots, or have been picked up by satellite imagery, that frankly engage in actions that are difficult to explain, movements that are hard to replicate, that we don’t have the technology for.

The report is expected to be released on June 1, Bartiromo said later in the program.

“We always look for a plausible application,” he said. “Sometimes we wonder whether our adversaries have technologies that are a little but farther down the road than we thought or that we realized.

“But there are instances where we don’t have good explanations.

“So in short, things that we are observing that are difficult to explain – and so there’s actually quite a few of those, and I think that that info has been gathered and will be put out in a way the American people can see.”