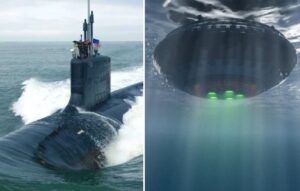 A U.S. nuclear-powered attack submarine struck a mysterious object while submerged in international waters in the Indo-Pacific region last week, the Navy said, adding that no life-threatening injuries were reported.

“The submarine remains in a safe and stable condition. USS Connecticut’s nuclear propulsion plant and spaces were not affected and remain fully operational,” U.S. Pacific Fleet said in a statement late Thursday

No further details about the circumstances of the collision or the extent of damage to the USS Connecticut were available, but China’s Foreign Ministry expressed “serious concern” about what happened.

It did not say where the collision happened, but other officials said it was in the South China Sea.

USO is an unidentified object submerged in water. It is not yet known what kind of object it was and to whom it belongs.

“The US Navy has not requested assistance. The incident will be investigated,” the US Pacific Fleet Public Affairs office said in a statement.