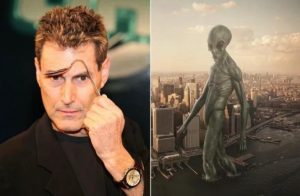 According to him, scientists have already stumbled upon “higher beings” who will now help humanity increase life expectancy.

Geller believes that aliens will teach humans how to “eradicate all disease” by increasing the average life expectancy to 220 years. A person born today will meet aliens during his lifetime.

Instead of scaring people with the aggressive behavior of aliens, he predicted that they would help people solve the mysteries of seemingly incurable diseases, allowing everyone to live much longer.

Uri Geller tweeted: “My dear friends, the child born today will meet aliens during his lifetime who will teach us how to eradicate all diseases. Human life expectancy will increase to an average of 220 years.”

Recently, a psychic whose special abilities were tested in the 70s by the US CIA warned NASA scientists to prepare for a massive alien invasion of Earth , which is supposed to happen in the near future.

He believes that Australian radio wave mapping scientists who discovered a giant energy source 4,000 light-years away may have stumbled upon a message from “superior” beings from outer space.