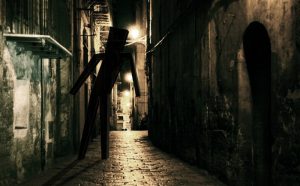 What no one expects to see is a living (?), walking stick figure – a real 2-dimensional character. Despite it sounding too quirky and too strange to be true, more and more people are reporting sightings of active stick figures throughout the world.

Sightings of stickmen are always reported as so bizarre that it’s terrifying, and it’s easy to see why that is. Stickmen existed for centuries as little drawings on paper, scribbled by bored school children throughout the world.

No one ever really expects to see a 2-dimensional creature in the shape of a classic stick figure strolling around in the real world. Much like the drawings, they are described as exceptionally thin, faceless, with oval or circular heads.

People who have witnessed these strange beings describe them as “impossibly tall,” and say that they walk with a bouncy, fluid, loping gait. No noises have ever been recorded or reported in association with these bizarre creatures.

The vast majority of sightings say that these creatures are black in color, but there have been a few sightings that have seen them in white, as well.

Unlike certain kinds of ghosts, as well as certain kinds of cryptids, witnesses of stickmen all agree that these bizarre beings are quite aware of their surroundings, and that some appear to have powerful feelings and reactions to people seeing them.

One witness said that he discovered a stickman in a hospital, and the stickman, upon “seeing” him, flailed its arms wildly in fear and loped away quickly. Others who have ran into stickmen say that the stickmen seemed to “watch” them with curiosity, or actually slowly pursue them once they realized that the witnesses had seen them.

Some stickmen seem to stand motionless as soon as they see a person who takes notice of them, as if they are hoping that the person will just walk by.

No matter what the stickmen seem to be doing when they are seen by witnesses, every single witness who has ever seen a stickman seems to agree on one thing – the terrifying, crippling feeling of dread and fear that they experience in the presence of these beings.

Much of these feelings can easily be attributed to the fact that any experience with the paranormal usually will leave a person feeling shaken, scared, or panicked, especially if the paranormal event is way stranger than anything that is normally discussed in supernatural circles.

However, the feelings that have been reported go so far as to describe it as akin to the feeling of being around “black eyed kids,” which suggests that these feelings may be a little bit deeper than a normal paranormal spook.

It’s also worth mentioning that stickmen sightings are also associated with feelings of “static” in the air, and low barometric pressure. This may have something to do with their ability to be seen in our world.

One of the things that make stickmen so incredibly bizarre is that there is no real reason why they should exist in regular lore. Unlike ghosts, they don’t have a tragic story that would tie them to this world.

Unlike regular cryptids, they don’t have a stomach, a brain, or even skin. Unlike shadowpeople, demons, and vampires, they were never associated with evil activity or ancient lore of some sort.

It’s also unlikely that they are extraterrestrial in origin. They are simply there, and they are apparently becoming more frequently seen. Some sites go so far as to say that they are the new “paranormal trend.”

Stickman sightings can take place in almost any place imaginable, and there never seems to be any real pattern to where people run into them. Some sightings have been seen in hospital wards. Others have taken place in the middle of suburban neighborhoods.

One stickman was even seen balancing ontop of a power line. The only consistent remark that people tend to have about stickman sightings is that they usually (note: USUALLY) happen in places which don’t have much light, such as alleyways, forests, and parking lots.

So far, there aren’t many theories that would accurately explain what these creatures are, or how they possibly could exist. The most common theory that is being circulated is that these are interdimensional beings that are simply exploring our world and observing the people in it.

It would seem as though they don’t ever really expect people to notice them due to the fact that they are not of this dimensional plane, which would be why these bizarre creatures seem to react when they realize that witnesses can see them.

As one would expect with these kinds of bizarre instances, a close second theory (if not evenly matched in popularity) is that these weird sightings are all in the minds of the viewers. Still, it seems too coincidental that so many different people, from so many different backgrounds, would get so many sightings of similar 2-dimensional creatures.

Since the first major internet mention of the stickmen phenomena in 2009, more and more sightings have been found throughout forums, bulletin boards, and even comments on blog postings. Every time a new stickman sighting comes out, it seems like there is more and more buzz. It is understandable.

No one really knows much about these bizarre creatures, so when a new sighting does come out, it’s easy to get excited to see if there is a new piece to the stickman puzzle to examine. Will we ever really get down to the real facts about what stickmen are, how they exist, or where they come from? Probably not, but we can always marvel at how incredibly bizarre they are.