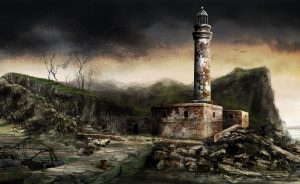 Flannan Isles Lighthouse located at the highest point on Eilean Mòr, one of the Flannan Isles in the Outer Hebrides off the west coast of Scotland. And it’s best known for its keepers’ mysterious disappearance in 1900.

The first record that something was disturbing on the Flannan Isles was on 15 December 1900 when the steamer Archtor, on a passage from Philadelphia to Leith, noted in its log that the light was not operational in poor weather conditions.

When the ship docked in Leith on 18 December 1900, the sighting was passed onto the Northern Lighthouse Board. The relief vessel, the lighthouse tender Hesperus, was unable to sail from Breasclete, Lewis as planned on 20 December due to adverse weather; it did not reach the island until noon on 26 December.

The lighthouse was manned by three men: Thomas Marshall, James Ducat, and Donald MacArthur, with a rotating fourth man spending time on shore.

On arrival, the crew and relief keeper found that the flagstaff had no flag, none of the usual provision boxes had been left on the landing stage for re-stocking, and more ominously, none of the lighthouse keepers were there to welcome them ashore.

Jim Harvie, the captain of the Hesperus, attempted to reach them by blowing the ship’s whistle and firing a flare but was unsuccessful.

A boat was launched and Joseph Moore, the relief keeper, was put ashore alone. He found the entrance gate to the compound and main door both closed, the beds unmade, and the clock stopped.

Returning to the landing stage with this grim news, he then went back up to the lighthouse with Hesperus’ second-mate and a seaman. A further search revealed that the lamps were cleaned and refilled. A set of oilskins was found, suggesting that one of the keepers had left the lighthouse without them, which was surprising considering the severity of the weather on the date of the last entry in the lighthouse log.

Moore and three volunteer seamen were left to attend the light and Hesperus returned to Lewis. Captain Harvie sent a telegram to the Northern Lighthouse Board dated 26 December 1900, stating:

“A dreadful accident has happened at the Flannans. The three keepers, Ducat, Marshall and the Occasional have disappeared from the Island… The clocks were stopped and other signs indicated that the accident must have happened about a week ago.”

On Eilean Mòr, the men scoured every corner of the island for clues as to the fate of the keepers. They found that everything was intact at the east landing but the west landing provided considerable evidence of damage caused by recent storms.

A box at 33 metres (108 ft) above sea level had been broken and its contents strewn about; iron railings were bent over, the iron railway by the path was wrenched out of its concrete, and a rock weighing more than a ton had been displaced. On top of the cliff at more than 60 metres (200 ft) above sea level, turf had been ripped away as far as 10 metres (33 ft) from the cliff edge.

The missing keepers had kept their log until 9 a.m. on 15 December. The entries made it clear that the damage had occurred before their disappearance.

At that time many offered various theories in newspapers, grooming ideas of paranormal activity, ghost stories, pirate kidnappings, and spying affairs, all providing no evidence whatsoever to back their claims.

It became difficult for the Northern Lighthouse Board to employ new keepers because of the widespread rumors about the mystery, as a dark shadow loomed over the Flannan Isles tower.

Recent research by James Love discovered that Marshall was previously fined five shillings when his equipment was washed away during a huge gale. It is likely, in seeking to avoid another fine, that he and Ducat tried to secure their equipment during a storm and were swept away as a result. The fate of MacArthur, although required to stay behind to man the lighthouse, can be guessed to be the same. Love speculates that MacArthur probably tried to warn or help his colleagues and was swept away too.

A further proposal is based on the psychology of the keepers. Allegedly MacArthur was a volatile character; this may have led to a fight breaking out near the cliff edge by the West Landing that caused all three men to fall to their deaths.

Another theory is that one of the men went insane (perhaps MacArthur, as evidenced by him leaving the lighthouse without his rain gear and his strange behavior documented in the log book), murdered the other two, threw their bodies into the sea, and then jumped in to his own death.

Among modern theories are those connected to paranormal activity, such as abduction by aliens

In 2018, the film “The Vanishing” was released about this strange mystery.