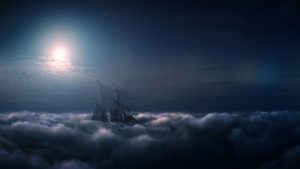 From a time when a settlement at the mouth of the Hudson was known as New Amsterdam instead of New York, there have been tales of a strange sailing ship bearing no recognizable flag sailing into the Hudson River from Gravesend Bay, all the way up to the northern most reach of the Hudson Highlands.

With the majority of the sightings in the highlands themselves. It was believed that this ship brought a warning and death.

All attempts to hail the ship and get a response failed. Assuming that the ship had mal intent when unresponsive, it was fired upon with cannon shot. However, the shots seem to do no physical damage even though they positively passed through the vessel.

And many have tried to approach the ship when the weather was calm for a closer look, meaning to attempt to board her. As soon as sailors would get close, the ship would disappear into thin air. Sometimes it would reappear behind them or in front further away than it was before. It was after this that sailors of the Hudson realized this ship was not of this world.

When no storms were about, it would be seen mostly by the moonlight. This strange phantom of a ship seemed to appear right before or when a massive storm would arrive. It was thought that if the ship came bearing upon yours, your ship was doomed.

Many Dutch sailors believed that this was a ghost ship summoned by the Heer of Dunderberg to prey upon unwary vessels on the river. A ship summoned from their homeland in Europe where witches and goblins thrive.

The Heer of Dunderberg was told to be a goblin king and his army set about to bring his wrath of rain, wind, thunder and lightening to sailors making their way up and down the Hudson. Inexperienced sailors being the most likely victims. Dutch sailors would fasten horse shoes to their masts in an attempt to ward off the Dunderberg.

Most sightings would occur near the shadows of the Dunderberg, a large mountain thought to be the dwelling place of the Goblin King. This mountain also marked the southern gateway to the Hudson Highlands where the most treacherous encounters would occur. Sailors claimed to see a goblin-like figure when the biggest of storms hit.

He was a plump round fellow with a light colored sugar-loaf hat who was carrying a horn and would be seemingly shouting out orders, commanding the gales and lightening. Some would tell tales of seeing the sugar-loaf hat of the Storm King as he became to be known by some, blow in from nowhere and land in the rigging of the ship.

It would stay there until the ship passed out of the Heer of Dundenberg’s domain, then blow away as if by some unseen hand. Then the skies would clear. The northern boundary which marked safety was just beyond Pollepel Island.

Some sailors reported seeing the Storm Ship lingering in anchorage at Pollepel Island which led them to believe that island was the home harbor for the phantom ship. Some referred to this place as Dead Man’s Isle.

It became a ritual at one point, to leave a new sailor on the island on the voyage up the river, and then pick him up again on the way back. If he survived! If he did, then it was thought that the Heer of Dundenberg would leave him in peace during his future voyages up the river. Any attempts to inhabit this island have failed. The ruins of Bannerman Castle stand there as a testament to this.

There are those who believe that this ghostly ship is the Halve Maen, then vessel of Henrick Hudson and crew in an trans-morphed form. The ghosts of Henrick and his crewmen have been seen up river where it meets the Catskills on occasion. It is said that Henry himself happened upon ghostly figures when he and his crew grounded his ship.

When the gales kick up on the Hudson River and the sky looks ominous, be sure to keep a keen eye out for the Storm Ship of the Dunderberg!