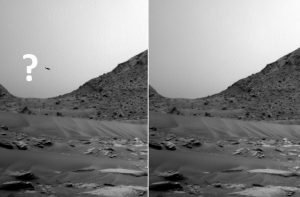 These photographs show what appears to be an atmospheric anomaly; something like an object moving across the field of view of the rover’s camera.

Upon closer inspection it looks like the right part of the object is moving faster than the left part as there is a motion blur on the right-side. Or could this UFO-like object be emitting smoke?

The image is significant because it is one of a series of two images taken almost at the same time; only this particular frame shows the unidentified object, suggesting that it is not a dust speck but something in motion.

Unexpected anomalies on photographs taken on Mars and the Moon and beamed back to Earth for further examination by NASA are nothing new.

NASA has not commented on any of the strange sightings so far, but alien hunters have suggested that these are alien ships monitoring humans’ baby steps into the universe.

An open mind is required when viewing images from other planets. One day our very survival may depend on it.