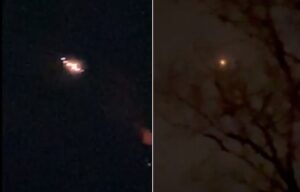 On the same day, January 6, 2021, unknown bright lights have been recorded over White Lake Michigan and Bend, Oregon, reports ufosightingshotspot.blogspot.com.

Witness was driving home when he saw a bright orange orb in the sky on which he pulled over and took a video of the object.

This evening was cloudy, and leafless trees gave the video a nice gauge to see how it was moving. According to the witness, it definitely was not an airplane, nor a drone. It pulsated, brightened, and eventually faded out of sight.

The witness while driving noticed an object with lights in the sky that wasn’t moving and there were no lights blinking He started recorded at that time it started moving. It looked disc-shaped and the way it was moving was very odd.