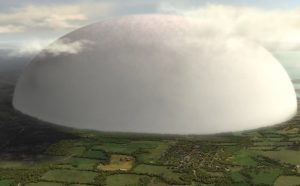 Anomalien.com reader Malcolm Smith shares his story about encounter with the unexplainable.

It was nearly fifty years ago. But it’s still as clear in my mind now as it was then. A bizarre, all-white, house-sized object the like of which I’d never seen, before or since. And I still have no explanation for what it was.

It was a calm, clear spring morning, sunny with a breeze and I was walking in the wild, rolling hills of Mid Wales. It’s a remote area; no habitation for miles around as it still is today. One of my regular trudges was to the highest hilltop, a ridge not much over two thousand feet high but the spot that commanded by far the best view for miles all around.

Mid-Wales Hills that Hold a Secret

And I knew those views so very well; I knew what to expect I would see in every direction. The bobs of white cotton grass speckling the wet, peaty ground in spring. A scatter of scruffy-looking sheep eking out the grazing. And as summer progressed, the pale straw colour as the life gradually faded out of the sedges. Then the russet tinges of autumn.

But this spring morning there was a strange shape in the familiar landscape. It was a mile or so to the north, just down from the brow of the next ridge. A white object. Not startlingly white like fresh snow. A sort of dull parchment white. Set against the spring green vegetation, it stood out because it was so incongruous.

Unidentified Object the Size of a House

Its shape was very odd. An igloo-like half dome of polygon-shaped sections, its flat base on the ground. A bit like a geodesic dome cut in half but smaller and opaque.

As I always did, I had binoculars with me so there was no doubting the object’s shape. It was the size of a small house. It didn’t move; there was a steady breeze but the dome didn’t shake or flutter, even though I had the sense it was made of a fabric-like material rather than something solid. It had no windows or doors that were visible. And none of it glinted in the bright morning sun.

Then I noticed sheep running away from it. There are always sheep in these hills. Sometimes you surprise one chomping away on tough old grasses, obviously in a world of its own. It runs off, startled. But only for a few yards before it stops and stares at you in disgust.

But these sheep were really startled. They ran and ran, 30, 40, 50 yards maybe. Yet the object didn’t move at all. It made no sound that I could hear. There were no bright colours to be seen. What was it that frightened these sheep?

I looked around in every other direction. I suppose I was doing a reality check. Everything else looked as it always did. The far-off hills, the stone-built cairn to the north-east, the distant, dark green conifer plantations. Nothing else was different in my 360 degree field of view except for this half dome the size of a house!

The Object Moves, but Silently

So it was just me – a 16-year-old boy – and a white dome. I kept staring at it in disbelief. Then, suddenly, it began to move. Silently. Not in the direction of the wind but almost directly against it. Slowly and perfectly smoothly. It looked as if it might be gliding a few inches above the rough sedges and moor grass.

Within a few seconds it had disappeared from view down a gentle slope into a shallow stream valley. I never saw it again. I had watched it for fifteen minutes. It had left no evidence of flattened vegetation, not a trace of its having been there.

That white, dome-shaped image is ingrained in my subconscious, as fresh now as if I was standing again on that isolated hill. I have told only a few people. When you’ve seen something you can’t explain, you become sensitive to those glances that imply you’ve made it up or you were hallucinating. After all, there’s nobody to corroborate it. Where I saw it was – and still is – one of the wildest, least inhabited places in Britain.

Never Had an Explanation

But I know that whatever it was I saw was no apparition. Over the years, I’ve gone back several times to the spot where I stood and to the place where the object was when I first spotted it – a slightly raised ridge of rocky ground in the shallow undulations of those waterlogged, peaty hills. I can’t shake off its image.

I look at that spot and wonder if I’ll ever know what that incredible dome was. It wasn’t a grounded weather balloon – it didn’t billow even a fraction in the stiff breeze. Was it some kind of prototype transport for use on rough or wet ground being tested out of the public gaze?

But why so far from any habitation or road? Why no windows or doors? How could anyone steering it see where it was going? Was it remote controlled and if so, by whom? And how was it powered if it moved so silently?

It’s the only object I have ever seen for which I have no explanation. But that image is as clear now as it was then, hotwired in my brain. I thought I would have forgotten about it long ago, but the desire for an explanation remains undimmed. I think about it now more than ever, but I have no answers. Perhaps I never will have.