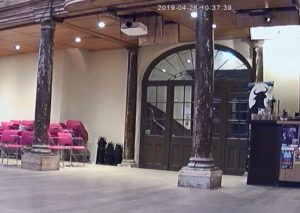 During a visit to a local theater, a paranormal research team captured some fascinating footage, reports epd24.co.uk.

Recorded at St George’s Theater in Great Yarmouth, England by Ghosted UK, the footage shows a number of weird silhouettes moving back and forth along a corridor at the entrance of the building.

The figures were described by group member Tim Johnson as “unexplained paranormal activity.”

“I haven’t got a clue what they are but it definitely isn’t the shadow of people because you would have seen somebody walk in front of the window,” Tim said.

“It is really exciting and we want to go back again to explore the building further.”

About 00:16s can see the mysterious shadows in the video below.

Did Nostradamus predict the eruption of Yellowstone in 2023?