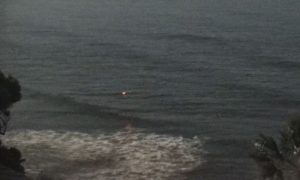 A beach webcam placed in Beacons unexpectedly filmed a glowing USO (Unidentified Submerged Object) that mysteriously appeared along the coast of Encinitas, California, on May 7, 2020.

The person who sent the video to Mufon described the amazing UFO sighting as follows:

“Around 10:30 pm my son was viewing the surf webcam video located at Beacons in Encinitas. Around the 3 min mark you can see an orange object in the lower left quadrant of the screen.”

“We observed the object rises up from the ocean then submerge. All the while being able to see the orange object with an orange tail/exhaust hovering above the ocean.”

“Then submerged, then began flashing while the light moving very fast. When it looked like it was at the horizon, ascended, flashed and then disappeared.”

“The day after this particular sight had been shut down and the video was gone. Luckily my son had saved the video.”

Is this another evidence that there’s a hidden underwater UFO base off the coast of California?