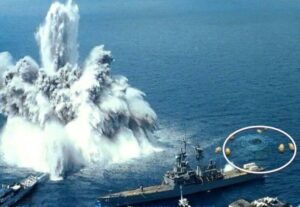 Mostly the USO encounters involve strange sonar readings. Sometimes chases ensue. On occasion, however, the clashes between USOs and naval vessels turn deadly. The strange and tragic sinking of the USS Scorpion, lost with a crew of 99 on June 5, 1968 off the Azores, is one of those cases.

Documents now reveal that heavy USO activity was occurring before, during, and after the Scorpion’s loss…and arriving search and rescue vessels had their own chilling encounters with UFOs and USOs.

For many decades the USN has been encountering and investigating mysterious USOs navigating the world’s oceans. Many of the run-ins involving alien craft occur with surface vessels. Warships have tracked large disc or spherical craft diving into or surfacing from the sea.

Over the years many Russian and American ships were harassed and monitored. Crews of destroyers and aircraft carriers witnessed bizarre lights—definitely not emitted by sealife—passing by or skimming underneath their ships.

The UFO-USOs have sometimes exploded from the ocean shooting skywards as the military vessels went to full alert status.

Some debriefings describe sightings of disc craft as wide as one-half mile across, dwarfing the surface military vessels.

Not all sightings are passive. Some UFO-USOs have dived at ships in a threatening manner, others have beamed intense lights at naval vessels in acts that crews interperet as aggressive or designed to intimidate.

Researcher Paul Stonehill relates a 1984 incident where the Russian warship GORI happened upon an Arab merchant vessel under “attack” by a UFO-USO.
The official report was made by several Russian officers, including an officer named Globa. The second-in-command of the vessel, S. Bolotov, also testified about the incident. The entire report was later corroborated by many of the crew.

Events such as these were taken very seriously by the Russian authoriries as they had suffered losses from encounters with UFO-USOs in the past and their intelligence agents had confirmed what happened to the US Naval submarine Scorpion just 16 years earlier.

In part their testimony [edited] described the following: “…both men observed a strange polychromatic object. When the object was astern, it stopped suddenly. S. Bolotov shouted, ‘It is a flying saucer, a real saucer, my God, hurry, hurry, look!’

“Globa looked through his own binoculars and spotted an object that he later described as an upside-down frying pan. The UFO gleamed with a grayish metallic shine.

The base of the object’s body consisted of two semi-discs, the smaller being on top; they slowly revolved in opposing directions. At the circumference of the lower disc Globa saw numerous shining, bright, bead-like lights.

“The seaman’s attention was drawn to the bottom portion of the UFO. It looked as if it was completely even and smooth, its color that of an egg yolk, and in the middle of it Globa saw a round, nucleus-like stain.

“At the edge of the UFO’s bottom—which was easily visible—was something that looked like a pipe. It glowed with an unnaturally bright rosy color, like a neon lamp.

“The top of the middle disc had a strange triangular-shaped crown. It seemed that it moved in the same direction as the lower disc, but at a much slower pace. Suddenly the UFO jumped up several times, as if moved by an invisible wave.

Many lights illuminated its bottom portion. The crew of GORI tried to attract the object’s attention using a signal projector. By that time the GORI commander, Captain Sokolovky, reached the deck with his men. He and his First Officer watched the object intensely.

“The UFO’s veered towards another ship that approached the GORI’s port side: an Arab cargo ship bound for Greece.”

The Arab crew confirmed the UFO approached them and then hovered overhead shining intense beams down upon their ship. No more than 90 seconds “later, the object changed its flight’s trajectory, listed to the right, accelerated and ascended rapidly.

“The Soviet seamen claimed that when it rose through the clouds—appearing and disappearing again—it would occasionally reflect the sun’s rays. The craft then flared-up, like a spark, and was instantly gone.”

Many of the Soviet reports also were archived by U.S. intelligence agencies monitoring Russian transmissions. The government entity most involved in that sort of information gathering was (and still is) the National Security Agency.

Some submarines ‘duel’ with alien craft

Like the Americans, Russian submarines had many encounters with USOs, and some allude to the loss of one or more nuclear subs after “dueling” with superior alien craft.

Stonehill shares the scuttlebutt of some high-ranking Soviet sonar-operators that detected mysterious pings coming from great depths. At the time, the Soviet subs were being chased by huge unknown objects that easily outmaneuvered the Soviet submersibles. According to the accounts, “The pursuers changed their speed at will―speeds that were much faster than any other similar vessel in the world at that time.

Allegedly, one Lieutenant-commander, Ukrainian Oleg Sokolov, told a group of naval students that during the duty of surface watch he’d observed through the sub’s periscope the ascent of some strange object rising from beneath the ocean.

Sokolov confided he was not able to specifically identify the object because of the prismatic optical system of the periscope. This underwater “launch” took place in the early 1960’s in an area that was known as a UFO hotbed of activity: the Azores—the same region where shortly after Sokolov’s sighting the USS Scorpion was mysteriously lost.

The Azores: a hotbed of UFO activity

The Azores are nine volcanic islands about 930 miles west of Lisbon, Portugal. They are rugged, beautiful, idyllic…and aleegedly a veritable hotbed of ET activity.

During the early 1960s, many nation’s navies recognized that the Azores often had strange craft coming and going.

Some military forces speculated that extra-terrestrials had an underwater base in the region. Among those suspecting aliens maintain an underwater presence far off the coast of Portugal are the Americans and Russian militaries.

The fast attack submarine, USS Scorpion, the pride of many submariners, had an exemplary record and an unblemished reputation for excellence. The boat was state-of-the-art and had a crack crew and a series of smart and dogged skippers.

Yet June 5, 1968 the USN officially declared the Scorpion lost with all hands. The nuclear submarine had suffered a catastrophe and took 99 skilled seamen to the bottom with her.

What happened? Various theories have been suggested. None account for some of the mysterious—and then classified—events that led up to the disaster. Other theories aren’t supported by the actual physical evidence later gathered from the wreckage. 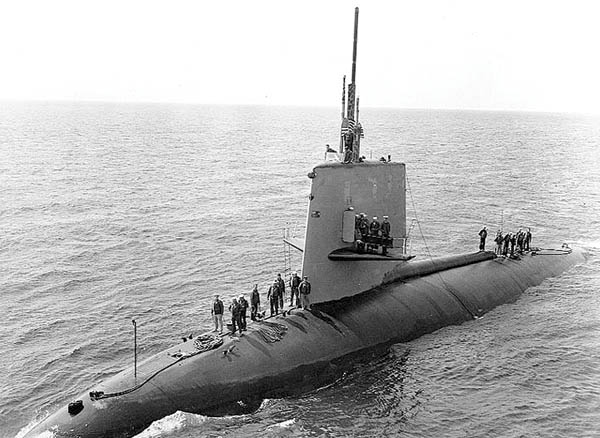 The mainstream theories about what happened to the Scorpion include:

1. The accidental activation of torpedo or an explosion of torpedo. No forensic evidence of such an incident, however, can be proven by analysis of the wreckage.

2. A malfunction of the sub’s trash disposal unit. That theory was dismissed by engineers as highly improbable.

3. Wikipedia writes that “Ed Offleys book, Scorpion Down provides evidence that the Scorpion was sunk by a Soviet submarine in a stand off that started days before May 22. The Scorpion was redirected from her original heading for home to intercept a Soviet Naval group that had just been harassed by another U.S.
submarine, the USS Haddo. The Soviet navy had good reason to believe that earlier that year their submarine, the K-129 was sunk after USS Swordfish collided with her and were looking to retaliate. Also in 1985 it was discovered that the KGB had a spy-ring (the so called ‘Walker Spy-Ring’) led by John Anthony Walker, Jr. in the heart of the U.S. navy’s communications and actually had the means to decipher almost all communications to and from submarines since at least early 1968. So [the theory goes] they actually knew in advance that the Scorpion was coming for them. There was a common agreement made with both navies to hide the truth about both incidents.”

Offleys argues that the Scorpion was torpedoed and sunk by the Russians.

But, Stephen Johnson in Sinking the Myths — A Review of the Evidence: The May 22, 1968 Loss of the USS Scorpion, observes: “The fundamental thing to remember is that Scorpion’s wreckage exhibits massive and obvious evidence of hydrostatic collapse damage, also called “implosion” damage.

Such damage is obvious on two different locations fore and aft on Scorpion’s hull, and occurs when an intact submarine, unmarred by blast damage from an underseaweapon, descends below its crush depth.”

Back in the 1960s the Soviet subs were notoriously noisy and the USN easily tracked them all over the world. It might have been possible for the Scorpion to be torpedoed, but the wreck shows absolutely no evidence of that.

A Soviet sub might have rammed the Scorpion, and the damage to the sunken submarine supports ramming, but the Soviet vessel would have also suffered massive damage, and again, the Scorpion would have easily detected the Soviets approaching long before any Russian sub could have reached ramming range.