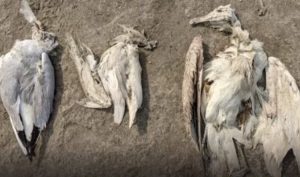 In India, under mysterious circumstances, 5,000 birds died near Lake Sambhar – India’s largest salt reservoir. Now experts are trying to figure out what caused the simultaneous death of so many birds.

Sambhar Lake is located 80 kilometers from the village of Jaipur (southwest). In a certain season, a huge number of birds gather on the shore of the reservoir – waders, flamingos, storks and others (a total of about 10 species). About half a month ago, the Indians began to observe more and more dead birds.

On a coastal stretch of 12 kilometers, 5 thousand birds were found according to official data. The busy coastline in the past today has become a bird cemetery.

A small number of surviving birds remained. There were so many corpses at some points that everyone thought that someone was dumping a pile of manure on the beach.

The cause of death of all birds is still unknown.