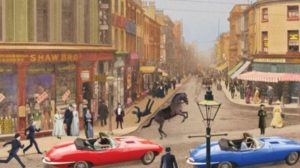 Time has little to do with your watch or that clock on your mobile phone; that type of time is just an artificial guide to keep us all in synchronization, and should you venture over 675 miles east or west from here you will have to add or subtract an hour from your clock, depending on what direction you travel as you enter a new time zone. What is real time? By time, I mean that thing that takes us into the future at a rate of sixty seconds a minute.

That question has baffled physicists and philosophers for centuries, and only recently have workable theories in quantum physics shed a little light on the strange nature of time.

According to modern physics, it would seem that yesterday and tomorrow are as real as today; the past has not gone anywhere and the future is not some ghostly scotch mist, waiting to solidify it already exists, but we haven’t reached it yet.

Time in this sense is like the long groove on one of those old vinyl records. A groove on an average LP is a third of a mile in length, and contains the entire A-side, of an album, which might last around 25 minutes.

When we place the needle stylus at any point on that groove, we get the illusion the song is being played now – but if someone created a record player with two needles, one playing a few inches ahead of the first needle, we’d have two notes as different sections of the song were played.

If we think of the timeline of history as a spiral groove on a vinyl disc, the present ‘what we term as now’ would be where we placed the needle.

This would mean that all time is eternally present; past and future are all there on the groove, from the formation of Earth, the arrival of the dinosaurs, to the Moon Landings and your own birth and death, and what you regard as the present is where your stylus – or consciousness – happens to be.

Every now and then, something strange happens in our perception of time – and these are called timeslips. For centuries, people have found themselves – usually for a short while – in the past or future.

It’s as if the great needle on our hypothetical record player has jumped out of the groove and landed in another part of the timeline spiral.

I have collected many of these timeslip accounts over the years and published them in my books and in magazine and newspaper articles, and readers often get in touch with me to report their own timeslip experiences.

Here’s just one example of such a timeslip account.

In 1980, a 60-year-old Huyton man named Doug decided to blow a considerable chunk of his redundancy pay on the acquisition of two E Type Jaguars that were advertised in the local press. One of the vehicles was royal blue and the other was venetian red, both 1973 models and the asking price for each was £4,000.

Doug was a car lover and also a maverick mechanic, and he planned to clean the Jags up and restore them to their former glory before selling them on for a considerable profit.

Doug had injured his ankle after a fall down stairs at his home, and so he asked his nephews, Tony and Brian Driscoll, if they’d pick up the Jags from the seller (who was based in Aigburth); the lads said they’d be delighted to.

“Bring them right here”; Doug told nephew Tony, “I don’t want you having a race with your brother down the Dock Road, got that?”

“Give them a good looking over,” Doug instructed, “this fellah’s a decent seller but have a good look at the engines anyway and make sure he gives you all the logs books and that.”

Tony worked in the motor trade and had picked up vehicle for his uncle before. The two lads rode a hackney cab with the eight grand and picked up the Jaguars. Tony, being an Evertonian, drove the royal blue vehicle and Brian, an LFC supporter, drove the red Jag.

Once they got behind the wheel of such an elegant car, they couldn’t help themselves; they had a race back to Huyton.

Whenever a police car was in the vicinity or the road was choked with traffic, Tony and Brian would slow down and behave themselves, but when they reached Berry Street they saw the road was almost clear and they stepped on the gas.

It was Brian who noticed that something very strange was taking place first.

As the Jags were passing St Luke’s Church at the top of Bold Street, Brian saw that the road was cobbled and there were people in top hats and bowlers standing on the kerb, looking at him in his gleaming red vehicle. Then Tony saw a policeman on horseback galloping along behind him in his rear view mirror.

A nearby woman in an ankle-length dress and a huge bonnet was clinging on to the top-hatted man next to her, drawing back in fear at the sight of the car. It was as if the two brothers had driven onto the film set of some historical drama.

There was a clattering noise as something hit Brian’s car and he accelerated, narrowly missing a horse-drawn carriage on Renshaw Street. And then, in a flash, everything surrounding the two brothers turned modern again.

Brian never told his uncle what had happened, but Doug was baffled to find an old-fashioned walking cane with a brass ferrule in the backseat of the red Jag.

The brothers had, without a doubt, driven through the infamous Bold Street time fault, which I have documented so many times in my books. I wonder what the Victorians made of those E type Jags…