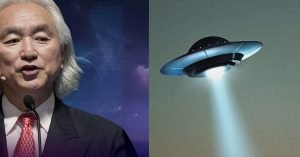 Dr. Michio Kaku, during an interview, stated that UFOs do not obey the known laws of aerodynamics and are beyond the technology that a person can produce today.

Dr. Michio Kaku, a world-renowned theoretical physicist, believes that the UFO phenomenon reveals such incredible technology that it is now up to the military to prove that UFOs are not objects from other worlds.

In a recent interview with Joe Rogan, Michio Kaku explained how numerous sightings were confirmed by credible witnesses in various ways, changing the distribution of the burden of proof.

Previously, people who believed in UFOs had to prove their existence, but now this burden has passed to the Pentagon, to the military, and it is they who must now prove that UFOs are not aliens.

In the past, scientists considered it taboo to discuss or be interested in UFOs. However, in recent years, so much evidence has accumulated that this paradigm has collapsed.

Regarding US Navy encounters with unidentified aerial phenomena, he suggested that hypersonic drones could be the cause. However, he explained why he thought it was unlikely.

Decades have passed since these objects were seen performing incredible maneuvers and accelerations. Dr. Kaku explained that this is a very new technology. Even though the US, Russia and China are working on hypersonic drones, the technology is still primitive. So we don’t know what they are, Kaku said.

What’s even more interesting is that these UFOs don’t produce sonic booms – when you break the sound barrier, you produce a powerful thump that can be heard for miles in all directions. These objects do not produce any audible noise and there are no visible driving forces.

Therefore, UFOs obey the laws of physics beyond our understanding and violate the known laws of aerodynamics, Kaku said.

Rogan asked Dr. Kaku if there was anything in the theory that could explain how UFOs move and behave, and if UFOs are technology from “another planet, galaxy or whatever.”

The theoretical physicist said that when he talked with colleagues on this topic, they referred to something obvious. This is that a rocket using conventional means traveling at 25,000 miles per hour would take 70,000 years to travel from the nearest star. Therefore, such objects cannot exist. Or can? That is why most scientists dismiss these sightings as alien because they contradict Einstein’s laws.

“But isn’t that stupid? It’s like saying, ‘Do you know how long it will take you to get a horse from Los Angeles to Sydney, Australia?'”, replied Rogan.

“That’s right,” said Dr. Kaku. “That’s why I say that, to summarize, that they are aliens – or whatever they are – they may be only a hundred years ahead of us, but you have to open your mind to the possibility that they are thousands of years more advanced than we are, and a thousand years is nothing compared to the age of the universe (+13.7 billion years).”

Once you get this far into the realm of energies, the laws of physics begin to crumble into something called the “Planck energy.”

And this is Kaku’s field of activity. String theory lives on the Planck energy, which is between 10 and 19 billion electron volts, a thousand trillion times more powerful than what was recorded at the Hadron Collider in Geneva, Switzerland.

Dr. Kaku concluded that any civilization capable of harnessing Planck’s energy would be able to dominate space and time and create wormholes and portals in space, indicating a type 3 civilization on the Kardashev scale.

Dr. Kaku explained that data collected by various sources indicate that UFOs move at an incredible speed – from Mach 5 to Mach 20, which is twenty times the speed of sound.

In addition, objects zigzag and we can even measure the G force inside the UFO, which is several hundred times the force of gravity. This means that the bones of any living being would be crushed by these forces.

Objects can descend 70,000 feet in a few seconds, and the most interesting thing is that they can even move underwater, which we did not suspect before.