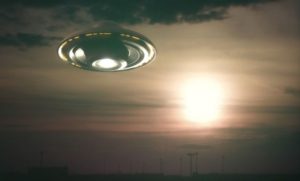 A group of senior American politicians has warned that UFOs pose “national security concerns” after getting a confidential briefing on a highly anticipated report on unidentified aerial phenomena that is set to be released later this month.

Some members of Congress were given advanced details about the contents of the Pentagon report, which is scheduled to be released before 25 June, and several said they are deeply worried about the findings.

“Clearly, something’s going on that we can’t handle,” said Tim Burchett, a Republican congressman from Tennessee.

In recent years a series of government videos showing unidentified aerial phenomena, or UAPs – the ufology community’s preferred term – have been released, including footage from a navy F-18 fighter jet which showed an oblong object flying through the sky near San Diego in 2004.

This April photos and videos taken by navy personnel were leaked online, showing triangular-shaped objects buzzing in the sky, and in May leaked military footage showed an oval flying object near a navy ship in San Diego – an apparent UAP hotspot.

“We take the issue of unexplained aerial phenomena seriously to the extent that we’re dealing with the safety and security of US military personnel or the national security interests of the United States, so we want to know what we’re dealing with,” said Sean Patrick Maloney, a Democratic congressman from New York.

“I think it’s important to understand that there are legitimate questions involving the safety and security of our personnel, and in our operations and in our sensitive activities, and we all know that there’s [a] proliferation of technologies out there,” he continued. “We need to understand the space a little bit better.”

“In this country we’ve had incidents where these UAPs have interfered and actually brought offline our nuclear capabilities,” he said.

“We also have data suggesting that in other countries these things have interfered with their nuclear technology and actually turned them on, put them online.”

One theory is that UAPs could be advanced Chinese or Russian aircraft, but Burchett dismissed that in his TMZ interview.

“I think that’s ridiculous. If the Russians had UFO technology, they would own us right now,” he said. “It has to be something that’s, that’s out of our galaxy, it just has to be, if it is in fact is real.”

The flurry of recent videos and the imminent release of the report has ignited an excitement around unidentified flying craft that has not been seen for decades. Barack Obama even weighed in, telling CBS recently that “there’s footage and records of objects in the skies, that we don’t know exactly what they are.”

Val Demings, a Democratic congresswoman from Florida, was also present at the UAP briefing.

“You know it’s always about our safety and security. Our national security is No 1, and so that’s really the area where we really focused on this morning,” Demings said.

The unclassified version of the UAP report released to the public will contain a classified index, which could prevent the most sensitive information from being released.

Adam Schiff, the Democratic chair of the House intelligence committee, described this week’s meeting as “an interesting briefing.”

“I did learn things that were certainly new to me,” Schiff told reporters. “But I think I’m going to leave it at that.”

Man Without Pulse, Wakes Up With Incredible Vision of Afterlife